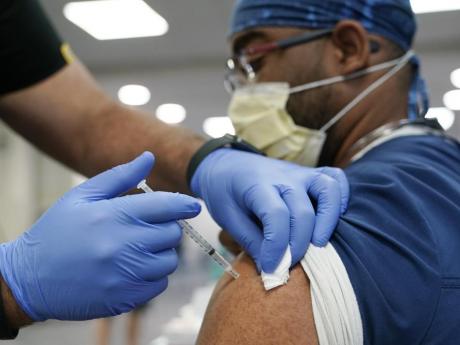 A healthcare worker receives a Pfizer COVID-19 booster shot at Jackson Memorial Hospital Tuesday, October 5, 2021, in Miami. This follows a recent recommendation by the Food and Drug Administration and Centers for Disease Control and Prevention advising people who are 65 and older, and workers whose jobs put them at high risk of exposure – including those in healthcare – to receive a booster shot six months after their second shot. (AP Photo/Lynne Sladky)

TALLAHASSEE, Florida (AP) — The county government that is home to Florida's capital was fined $3.5 million Tuesday by state health officials for requiring its employees to get COVID-19 vaccines and for firing 14 workers who failed to get the shots.

The Florida Department of Health issued the fine for Leon County, saying the municipality violated Florida's “vaccine passport” law which prohibits businesses and governments from requiring people to show proof of COVID-19 vaccination.

“These are people that, presumably, have been serving throughout this whole time and now all of a sudden they're basically getting kicked to the curb,” Florida Governor Ron DeSantis said at a news conference in St. Petersburg Beach.

Later, the governor tweeted, “No one should lose their jobs because of COVID shots.”

The law took effect last month and can result in a $5,000 fine per violation.

It is being challenged in court and conflicts with a Biden administration order that companies with more than 100 employees require their workers to be vaccinated or face weekly testing.

In a statement, Leon County Administrator Vincent Long said he was made aware of the fine through media reports.

“There is a genuine disagreement about the applicability of the statute and rule, and the county will enforce its rights using any remedies available at law, if necessary,” Long said.

The decision to fine Leon County comes a day after the Orlando Sentinel reported the state is investigating dozens of local governments, performing arts centres, the Miami Marlins, a law enforcement counter-terrorism unit and a concert by singer Harry Styles for violating the law.

Around 120 cases are being reviewed for violations, according to a public records request from the Orlando Sentinel.

In central Florida, the list includes Orange County government; the Orange County Convention Canter; AdventHealth, one of the state's largest health care systems; several performing arts venues; and the Amway Centre, which is home to the Orlando Magic and recently hosted a concert by Styles whose tour mandated that attendees either be vaccinated or have a negative COVID-19 test.