Russia, WHO differ on when approval will come for Sputnik V 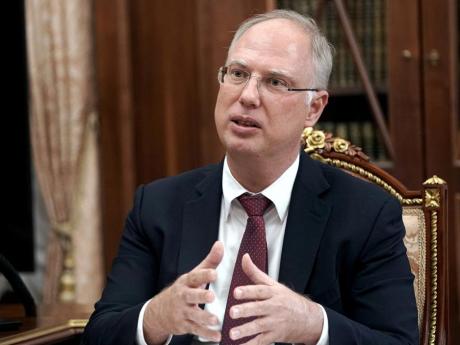 In this Friday, April 2, 2021, file photo, Russian Direct Investment Fund CEO Kirill Dmitriev gestures while speaking to Russian President Vladimir Putin during their meeting in Moscow, Russia. Dmitriev said Russia plans to provide up to 300 million doses of its Sputnik vaccine to the World Health Organization-backed initiative, COVAX, once the vaccine is approved by the WHO. (Alexei Druzhinin, Sputnik, Kremlin Pool Photo via AP, File)

MOSCOW (AP) — Russia is ready to provide up to 300 million doses of its Sputnik V vaccine to the World Health Organization-backed COVAX initiative, a top Russian official promoting the shot says, even though the WHO hasn't yet signed off on it and production issues have fanned customers' concerns worldwide.

Russian Direct Investment Fund CEO Kirill Dmitriev and the World Health Organization had vastly different takes Wednesday on when the Russian vaccine would get WHO's stamp of approval.

Sputnik V has been authorised for use in 70 countries around the world despite not yet being approved by the UN health agency even for emergency use.

Some countries, especially in Latin America, have expressed fears lately that they are not getting the vaccine's second shot in time to properly inoculate their people from COVID-19.

Dmitriev told The Associated Press that the Russian vaccine will be made available to COVAX, the WHO-backed programme designed to share vaccines more evenly around the world, once the shot is approved by the WHO.

He said he expects WHO's approval to come in the next two months.

The COVAX programme cannot use a vaccine that is not approved by the WHO.

“We believe that we can supply COVAX around 200 million doses a year, 200 to 300 million,” Dmitriev said in an interview.

“We just need the WHO approval to work with COVAX.”

But Dr Mariangela Simao, the WHO's assistant director-general for access to health products, wouldn't make any commitment to that timetable.

She said the approval process for Sputnik V is currently on hold, and once the legal procedures are sorted out, “we will reopen the assessment, which includes the submission of the data in the dossier — it's still incomplete — and resuming the inspections in the sites in Russia.”

“The timeline will depend when we get these legal procedures done and then we will be able to assess, with the applicant and the manufacturer, what would be the next step and how long it will take,” Simao said at a briefing in Geneva. “So we don't know yet.”

Dmitriev's comments came even as Russia has run into delays in providing the contracted amounts of Sputnik V to countries in Latin America and is facing a surge in infections and record-breaking daily virus deaths at home amid a slow vaccination rate.

Dmitriev, however, insisted that Sputnik shipments to Latin American nations are back on track.

“All those issues have been fully resolved,” Dmitriev told the AP.

“All of the issues with the second component are resolved in all of the countries.”

Despite his assurances, countries such as Argentina and Venezuela said they are still waiting for the promised vaccine shipments.