UK lawmaker stabbed to death while meeting with constituents 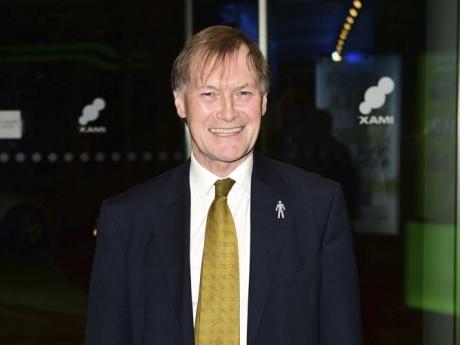 Conservative lawmaker David Amess attends the Paddy Power Political Book Awards at the BFI IMAX, Southbank, London on January 28, 2015. British police say a man has been arrested after a reported stabbing in eastern England. News outlets say the victim is Conservative lawmaker David Amess. The Essex Police force said officers were called to reports of a stabbing in Leigh-on-Sea just after noon Friday. It said “a man was arrested shortly after & we’re not looking for anyone else.” (Ian West/PA via AP)

LEIGH-ON-SEA, England (AP) — A long-serving Member of Parliament was stabbed to death Friday during a meeting with constituents at a church in England, an attack that united Britain's fractious politicians in shock and sorrow.

A 25-year-old man was arrested at the scene.

Police gave no immediate details on the motive for the killing of 69-year-old Conservative lawmaker David Amess and did not identify the suspect, who was held on suspicion of murder.

The attack came five years after another MP, Jo Cox, was murdered by a far-right extremist in her small-town constituency, and it renewed concern about the risks politicians run as they go about their work representing voters.

British politicians generally are not given police protection when they meet with their constituents.

Essex Police said officers were called to reports of a stabbing in the town of Leigh-on-Sea just after noon and arrested a man and recovered a knife.

“We are not looking for anyone else in connection with the incident and do not believe there is an ongoing threat to the wider public,” police said.

Sky News and other media said Amess was attacked during a regular meeting with constituents at a Methodist church in a residential section of the seaside city about 40 miles east of London.

Paramedics worked at the scene without success to save his life.

Amess had been a member of Parliament for Southend West, which includes Leigh-on-Sea, since 1997, and had been a lawmaker since 1983, making him one of the longest-serving politicians in the House of Commons.

A traditional Conservative on the right of his party, he was a well-liked figure with a reputation for working hard for his constituents and campaigning ceaselessly to have Southend declared a city.

He was knighted by Queen Elizabeth II in 2015 for his service, becoming Sir David.

Politicians from across the political spectrum expressed shock and sorrow at the death of Amess, who leaves a wife and five children.

Flags at Parliament were lowered to half-staff.