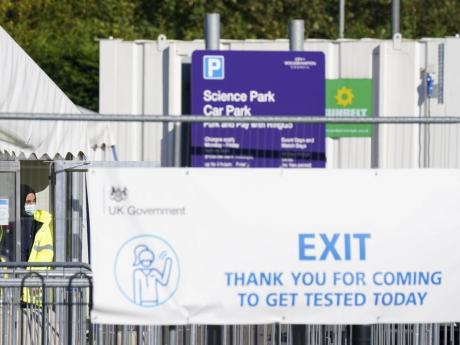 A COVID-19 testing sight opposite Wolverhampton Science Park, England, where the Immensa Health laboratory is based Friday, October 15, 2021. British health officials said Friday that 43,000 people may have been wrongly told they don’t have the coronavirus because of problems at a private laboratory. (Jacob King/PA via AP)

LONDON (AP) — British health officials said Friday that 43,000 people may have been wrongly told they don't have the coronavirus because of problems at a private laboratory.

The United Kingdom Health Security Agency said the Immensa Health Clinic Limited lab in the central England city of Wolverhampton has been suspended from processing swabs after the false negatives.

Will Welfare, the agency's public health incident director, said it was working “to determine the laboratory technical issues” behind the inaccurate tests.

The issue was uncovered after some people who were positive for COVID-19 when they took rapid tests went on to show up as negative on more accurate PCR tests.

The health agency said that “around 400,000 samples have been processed through the lab, the vast majority of which will have been negative results, but an estimated 43,000 people may have been given incorrect negative PCR test results,” mostly in southwest England.

The incorrect results were given between September 8 and October 12.

The agency said it was “an isolated incident attributed to one laboratory” and people affected would be contacted and advised to get another test.

Immensa was awarded a 119 million-pound ($163 million) coronavirus-testing contract by the British government in October 2020.

Alexander Edwards, an associate professor of Biomedical Technology at the University of Reading, said the problems were disappointing, but cautioned: “Let's not throw the baby out with the bathwater.”

“The majority of test results are correct, and it's worth remembering that our testing system has been built up from almost nothing at the start of the pandemic,” he said.

Britain conducts about 1 million coronavirus tests a day and reported almost 40,000 new infections a day over the past week.

Tests are required for everyone visiting or returning to the UK from abroad.

The government is easing those rules, however, announcing that starting October 24 fully vaccinated travellers to England from most countries can take quick lateral flow tests rather than costlier PCR tests.

People can take the tests at home and will have to send a photo to verify the results.

Transport Secretary Grant Shapps acknowledged that the system would be “based on trust.”

“Of course, the system requires people to be honest, like so many laws in this country,” he said.