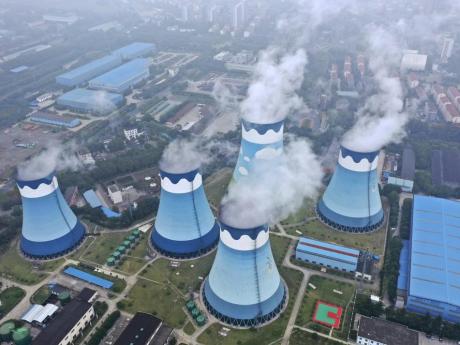 In this September 27, 2021 file photo, steam billows out of the cooling towers at a coal-fired power station in Nanjing in east China's Jiangsu province. The world's facing an energy crunch. Europe is feeling it worst as natural gas prices skyrocket to five times normal, forcing some factories to hold back production. Reserves depleted last winter haven't been made up, and chief supplier Russia has held back on supplying extra. Meanwhile, the new Nord Stream 2 gas pipeline won't start operating in time to help if the weather is cold, and there's talk Europe could wind up rationing electricity. China is feeling it too, seeing power outages in some towns. (Chinatopix via AP, file)

Power shortages are turning out streetlights and shutting down factories in China.

The poor in Brazil are choosing between paying for food or electricity.

German corn and wheat farmers can't find fertiliser, made using natural gas. And fears are rising that Europe will have to ration electricity if it's a cold winter.

The world is gripped by an energy crunch — a fierce squeeze on some of the key markets for natural gas, oil and other fuels that keep the global economy running and the lights and heat on in homes.

Heading into winter, that has meant higher utility bills, more expensive products and growing concern about how energy-consuming Europe and China will recover from the COVID-19 pandemic.

The biggest squeeze is on natural gas in Europe, which imports 90% of its supply — largely from Russia — and where prices have risen to five times what they were at the start of the year, to 95 euros from about 19 euros per megawatt hour.

It's hitting the Italian food chain hard, with methane prices expected to increase sixfold and push up the cost of drying grains.

That could eventually raise the price of bread and pasta at supermarkets, but meat and dairy aisles are more vulnerable as beef and dairy farmers are forced to pay more for grain to feed their animals and pass the cost along to customers.

“From October we are starting to suffer a lot,” said Valentino Miotto of the AIRES association that represents the grain sector.

Analysts blame a confluence of events for the gas crunch: Demand rose sharply as the economy rebounded from the pandemic, while a cold winter depleted reserves.

China's electricity demand has come roaring back, vacuuming up limited supplies of liquid natural gas, which moves by ship, not pipeline.

There also are limited facilities to export natural gas from the United States.

Costlier natural gas has even pushed up oil prices because some power generators in Asia can switch from using gas to oil-based products.

US crude is over $83 per barrel, the highest in seven years, while international benchmark Brent is around $85, with oil cartel OPEC and allied countries cautious about restoring production cuts made during the pandemic.

The crunch is likely short-term but it's difficult to say how long higher fossil fuel prices will last, said Claudia Kemfert, an energy economics expert at the German Institute for Economic Research in Berlin.

But “the long-term answer that has to be taken out of this is to invest in renewables and energy saving,” she said.