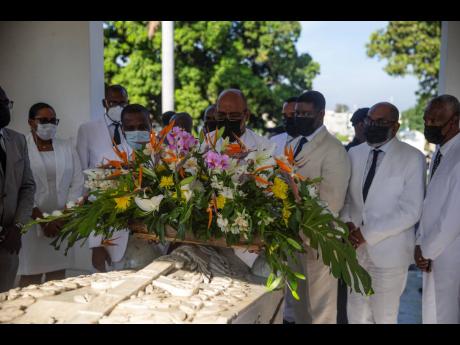 Prime Minister Ariel Henry says he has “deposited … a floral offering” at a ceremony marking the 125th anniversary of the assassination of Jean-Jacques Dessalines even as video recordings emerged showing that Henry and other government ministers were forced to retreat after they came under gunfire from a gang on Sunday.

“On the occasion of the 215th anniversary of the assassination, at Pont Rouge, of the illustrious founder of the nation, Jean-Jacques Dessalines, I have just deposited, in memory of the emperor, a floral offering, at the Altar of the Fatherland where his imperishable remains lie,” Henry said on his Twitter account.

“To commemorate the 215 years of the assassination of the Emperor Jacques I, this visionary, who nourished the majestic dream of freedom and progress, I made a floral offering on the public square of Marchand Dessalines, the first capital of the free and independent,” he added.

But a video recording published on social media and other platforms show armed security officials hurrying government and other officials out of the area as gunshots could be heard.

The videos also showed former policeman, Jimmy Chérizier, alias ‘Barbecue’, the reputed leader of the’G9’Gang dressed in white and surrounded by many hooded and heavily armed men attending the ceremony.

Media reports said that Chérizier had earlier announced that the government officials would not be allowed to enter Pont-Rouge on October 17.

The videos showed him smiling as he and his followers went to the emperor’s monument, where he placed his floral offering. They also carried a photo of President Jovenel Moïse, who was assassinated at his private residence on July 7.

While several people, including former military officials from Colombia, have been detained in connection with the assassination, the Haitian police say they are still searching for the main suspect, Joseph Félix Badio, who once worked at Haiti’s Ministry of Justice and at the government’s anti-corruption unit.

Last month, the chief prosecutor, Bed-Ford Claude, announced that he had asked a judge investigating the assassination of Moïse to charge Prime Minister Henry with involvement in the case over alleged phone calls he made to the main suspect.

Earlier this month, the head of the UN office in Haiti, Helen La Lime, told the Security Council that “long-awaited” national and local elections have now been further postponed while “insecurity has become rampant in Port-au-Prince as kidnappings are once again on the rise,and gangs have extended their control over large swaths of the city”.

Last weekend a group of US missionaries and their family members, including children, were reportedly kidnapped by an armed gang.

Reports said that at least 15 people were taken off a bus after visiting an orphanage. On Sunday, FBI agents arrived in Port-au-Prince to help with negotiations to liberate the hostages.