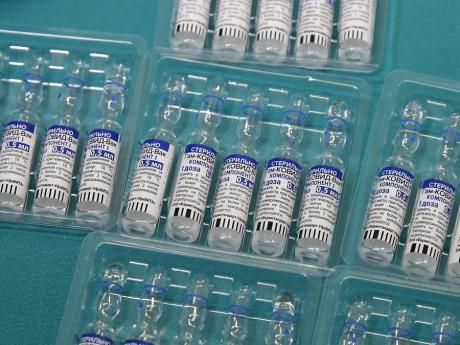 In this Friday, April 9, 2021, file photo, vials containing Russia's Sputnik V vaccine for COVID-19 are seen at the San Marino State Hospital in San Marino. The South African drug regulator has rejected the Russian-made coronavirus vaccine Sputnik V, citing some safety concerns the manufacturer wasn't able to answer. In a statement on Tuesday, October 19, 2021, the country's regulator, also known as SAHPRA, said the request for Sputnik V to be authorised could “not be approved at this time,” referring to past failed HIV vaccines that used similar technology. (AP Photo/Antonio Calanni, File)

The South African Health Products Regulatory Authority, or SAHPRA, said in a statement Tuesday that the request for Sputnik V to be authorised could “not be approved at this time,” referring to past failed HIV vaccines that used a similar technology.

A late-stage study published in the journal Lancet last year in more than 20,000 participants found that Sputnik V was safe and about 91% effective in preventing people from becoming severely ill with COVID-19.

Sputnik V uses two types of harmless viruses known as adenoviruses to carry the spike protein into the body, which then primes the immune system to produce antibodies against COVID-19.

South African officials pointed to two failed research studies testing an HIV vaccine also using Adenovirus Type 5, which found men who were vaccinated had a higher risk of being infected with HIV.

The regulators said they had asked the Russian makers of Sputnik V to provide data proving the vaccine's safety in a country with high rates of HIV but that “the applicant was not able to adequately address (their) request.”

Dr Julian Tang, a virologist at Britain's University of Leicester, was perplexed by the decision.

“It's a strange connection to make,” he said, explaining that while past concerns have been raised about using the particular virus vector in Sputnik V, much remains uncertain.

“It's not the vector that caused HIV so you can't just blame it on that,” Tang said.

The vaccine made by AstraZeneca uses a related chimpanzee adenovirus; both it and the Johnson & Johnson shot have been approved in South Africa.

The Russian makers of Sputnik V, the Gamaleya Institute, couldn't immediately be reached for comment. Amid widespread vaccine hesitancy in Russia, authorities have struggled to convince people to get vaccinated and the immunisation rate in the country has remained stubbornly low, at about 32%, despite the availability of Sputnik V.

Sputnik V is currently also being considered for authorisation by the World Health Organization and the European Medicines Agency.

The shot has been given the green light in more than 70 countries.

To date, no significant safety problems have been identified.