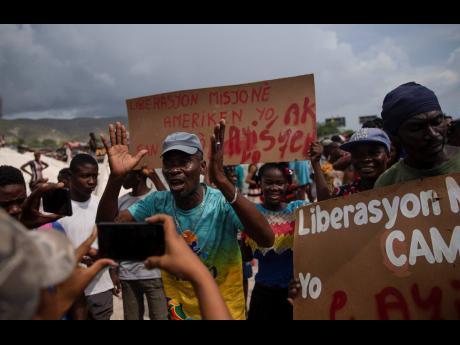 AP
People protest for the release of kidnapped missionaries near the missionaries’ headquarters in Titanyen, north of Port-au-Prince, Haiti, on Tuesday.

Efforts to win the return of 17 members of a US-based missionary group and a local driver stretched into a fourth day on Wednesday, with a violent gang demanding a $1-million ransom per person.

The group seized includes five children, ages from eight months to 15 years, although authorities were not clear whether the ransom demand included them, a top Haitian official said on Tuesday. Sixteen of the abductees are Americans and one Canadian.

The FBI and other US agencies were “part of a coordinated US government effort” to free the missionaries, White House Press Secretary Jen Psaki said on Tuesday, though officials from Haiti, the US and the church group involved were silent about sensitive details.

A wave of kidnappings has added to the other miseries besetting the Caribbean nation. At least 119 people were kidnapped in Haiti for the first half of October, according to the Center of Analysis and Research of Human Rights, a local non-profit group.

It said that in addition to the 17 members of the missionary group, a Haitian driver was abducted along with them, bringing the total to 18.

The Haitian official, who was not authorised to speak to the press, told The Associated Press that someone from the 400 Mawozo gang made the ransom demand on Saturday in a call to a leader of the Ohio-based Christian Aid Ministries shortly after the abduction.

“This group of workers has been committed to ministry throughout poverty-stricken Haiti,” the Ohio group said on Tuesday, adding that the missionaries worked most recently on a project to help rebuild homes lost in a 7.2-magnitude earthquake that struck southwestern Haiti on August 14.