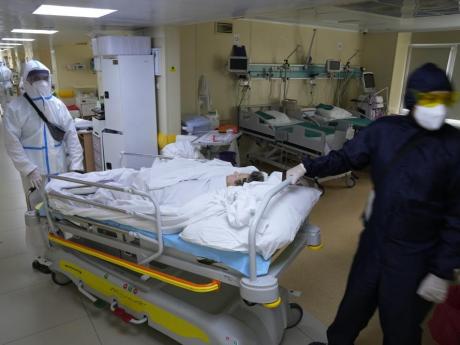 MOSCOW (AP) — Restaurants, movie theatres and many retail stores in Moscow will be closed for 11 days starting October 28, along with other new restrictions, officials said Thursday, as Russia recorded the highest numbers of coronavirus infections and deaths since the pandemic began.

The government coronavirus task force reported 36,339 new infections and 1,036 deaths in the past 24 hours.

That brought Russia's death toll to 227,389, by far the highest in Europe.

President Vladimir Putin has voiced consternation about Russians' hesitancy to get vaccinated and urged them to get the shots, but firmly ruled out making them mandatory.

He responded to the rising infections and deaths by ordering Russians to stay off work from October 30 to November 7, when the country already is observing a four-day national holiday, and Moscow Mayor Sergei Sobyanin followed up by introducing new restrictions in the capital, starting even earlier.

Gyms, cinemas and other entertainment venues, as well as most stores will close in Moscow from October 28 to November 7, along with kindergartens and schools.

Restaurants and cafés will only be open for takeout or delivery orders during that period. Food stores and pharmacies can stay open.

Access to museums, theaters, concert halls and other venues will be limited to those holding digital codes on their smartphones to prove vaccination or past illness, a practice that will remain in place even after November 7.

Most state organisations and private businesses, except for those operating key infrastructure and a few others, will halt work in the 11-day period, Sobyanin added.

Earlier this week, he said unvaccinated people over 60 will be required to stay home except for brief walks and open-air exercise.

He also told businesses to keep at least a third of their employees working remotely for three months starting October 25.