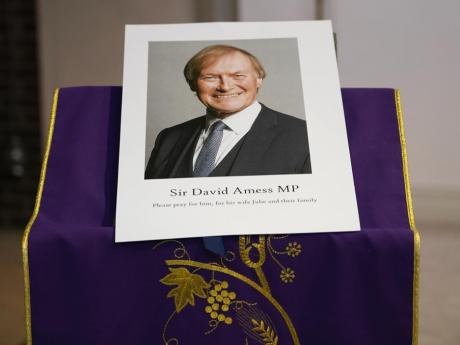 In this Friday, October 15, 2021, file photo, an image of murdered British Conservative lawmaker David Amess is displayed near the altar in St Peters Catholic Church before a vigil in Leigh-on-Sea, Essex, England. British authorities say a man has been charged with murder and preparing acts of terrorism in the stabbing of a Conservative lawmaker who was killed as he met constituents at a church hall last week. (AP Photo/Alberto Pezzali, File)

LONDON (AP) — British police charged a 25-year-old London man on Thursday with murder and preparing acts of terrorism in the stabbing of a Conservative lawmaker who was killed as he met constituents at a church hall.

Prosecutors said Ali Harbi Ali, a British man with Somali heritage, had “religious and ideological motivations” when he attacked David Amess last week in the town of Leigh-on-Sea.

The slaying shook a nation accustomed to having face-to-face contact with its politicians, heightened concerns about extremism and rattled British politicians, who say they face increasing levels of vitriol and abuse as they perform their jobs.

Ali made a brief appearance at London's Westminster Magistrates' Court on Thursday and was ordered detained until his next hearing.

He smiled at his legal team as he entered the court and spoke only to confirm his name, age, and address.

Ali was not asked to enter a plea at the preliminary hearing, which lasted less than 15 minutes.

Nick Price of the Crown Prosecution Service said the murder “has a terrorist connection, namely that it had both religious and ideological motivations.”

Matt Jukes, the Metropolitan Police Assistant Commissioner for Specialist Operations, said “no other arrests have been made and at this time we are not seeking anybody else in relation to this incident.”

The death of 69-year-old Amess, who had served in Parliament for almost 40 years and was knighted by Queen Elizabeth II in 2015, escalated concerns about security among Britain's politicians, who pride themselves on being accessible to their constituents.

The slaying came five years after Labour Party lawmaker Jo Cox was shot and stabbed to death by a far-right extremist.

Cox was the first British lawmaker to be killed since a peace accord ended large-scale Northern Ireland violence almost 30 years earlier.

British politicians are protected by armed police when they are in Parliament but generally are not given such protection in their home districts.

Home Secretary Priti Patel told the House of Commons on Wednesday that intelligence officers had upgraded the threat level for politicians from “moderate” to “substantial,” though she said there was no “specific or imminent threat.”