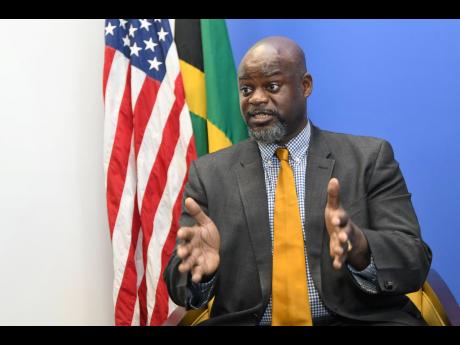 Rudolph Brown/Photographer
USAID country representative Jason Fraser said he was overcome with emotion when he first heard of the sacrifice of nurse Antonia Richards Stewart of the Kingston Public Hospital. 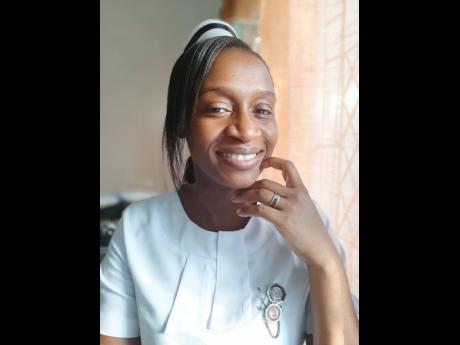 Antonia Richards Stewart spent all nine months of her pregnancy working on the COVID-19 ward at Kingston Public Hospital (KPH), right up to the time of her delivery. She is among hundreds of healthcare workers who have been battling on the...

Antonia Richards Stewart spent all nine months of her pregnancy working on the COVID-19 ward at Kingston Public Hospital (KPH), right up to the time of her delivery.

She is among hundreds of healthcare workers who have been battling on the frontlines amid infection surges, bed and oxygen shortages.

“I stayed because I was there already and anywhere in the hospital you go, COVID could be there. I kept myself in good health, wore my personal protective equipment, followed the infection-prevention methods, and I took the vaccine,” she said.

After consultation with her ob-gyn, she got vaccinated against COVID-19 when she was 37 weeks pregnant.

Richards Stewart knew at an early age that she had a gift of caring for others. When her dog was injured, she nursed his broken leg. From then, she began dressing the cuts and bruises of many people in her community, and assisted with providing care to her mom when she became ill, until the time of her death in 2012.

A nurse for over a decade, it has been a mix of “good, bad and brave days”.

Before COVID-19 cases were reported locally, she prepared herself to deal with the pandemic.

“When I started hearing the news coming out of other countries, I knew Jamaica wasn’t going to be too far from it. It was very scary, but if all of us run, who is going to stay and care? Before I even entered my matron’s office for her to appoint me as the leader of the team, I said to my husband that I just have a gut feeling that it’s going to be me,” she recalled.

Her best days on the COVID-19 ward were seeing patients recover and discharged from hospital; and the worst – multiple deaths. She said though she had several patients die over the years, deaths from the virus were of a different magnitude.

“When you are resuscitating one patient and all you hear is ‘Sister! Come, come!’ By the time I reached bed 13, the doctors are up by bed nine. On an eight-hour shift, there were times we were moving off five bodies. My colleague described it as working at a morgue, instead of a hospital,” she detailed.

Richards Stewart reasoned that when all has been done to help a patient and they realise that death is near, they experience impending gloom, and some behave erratic or are confused.

As a nurse, she too experienced impending gloom, especially because the last faces they see are those of nurses or doctors.

“There is no comfort for us as nurses to say they saw their sister yesterday or the wife just came this morning. Nothing like that. From the day they drop a patient off, that’s it because its an isolation ward, and that’s just horrible,” she said.

To limit the emotional toll from COVID-19 deaths, she tried not to get attached to patients – empathy, not sympathy. As the head of the team, she rotated the duties of the nurses to help them avoid mental fatigue.

She noted that even when off duty, some nurses would call to find out if their patient was still alive.

“I got attached to an old man. He was just full of energy and so nice. We discharged him and he came back for readmission, very ill. My staff had to pull me back from caring for him. When he died, no one told me. When I got to the ward to visit him, I realised that he was not on the bed. I had a meltdown, and I had to go off the ward and get myself together,” she said.

When the infections spiked, she sometimes worked 16-hour shifts, but with the support of her family, colleagues and church family, she persevered and suited up for a next shift.

Richards Stewart was featured by USAID as part of its nine-month Caribbean campaign in July, as a representative for frontline workers in the fight against the virus.

The nurse got international attention in September when US Secretary of State Antony Blinken mentioned her story in his remarks at the White House virtual COVID-19 summit.

“I was so surprised. I was like, are you kidding me? I was so excited,” she said, adding that she shared the news with her husband immediately.

USAID country representative Jason Fraser said he was overcome with emotion when he first heard her story.

“I don’t think a lot of people would’ve stayed on the frontlines while they were going through that [pregnancy], and that would’ve been an easy out, if you will, for most people, and most people would’ve understood it, but the fact that you stayed in and you still administered help and service to so many patients, it just shows you the level of dedication that you gave to Jamaica and the level of effort that you gave to the people who are suffering from COVID-19,” Fraser said.

“I am eager to go back to work, no matter where on the line I am, once I am giving of my service as God wants me to,” the nurse remarked.