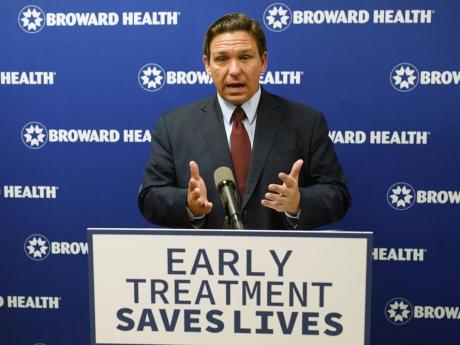 Florida Governor Ron DeSantis speaks at a news conference, Thursday, September 16, 2021, at the Broward Health Medical Center in Fort Lauderdale, Florida. The state of Florida is suing the Biden administration over its coronavirus vaccine mandate for federal contractors. The lawsuit was announced Thursday, October 28, 2021, by Governor DeSantis and opened yet another battleground between the Republican governor and the White House. (AP Photo/Wilfredo Lee, file)

TALLAHASSEE, Florida (AP) — The state of Florida on Thursday sued President Joe Biden's administration over its coronavirus vaccine mandate for federal contractors, opening yet another battleground between Republican Governor Ron DeSantis and the White House.

The lawsuit, announced by DeSantis at a news conference, alleges the president doesn't have the authority to issue the rule and that it violates procurement law.

He recently announced he would call state lawmakers to the Capitol next month to pass legislation to combat vaccine mandates enacted by private businesses.

DeSantis is eyeing a possible 2024 presidential run and has been consistent in his criticism of Biden's handling of the pandemic and other issues.

The case was filed in US District Court in Tampa and names Biden, NASA Administrator Bill Nelson as well as White House contracting officials as defendants.

In addition to a vaccine mandate for federal contractors, which is set to go into effect in December, Biden has also announced that private employers with 100 or more workers will have to require them to be vaccinated or tested weekly.

The roughly 17 million workers at health facilities that receive federal Medicare or Medicaid also will have to be fully vaccinated.

Additional details on the policies are expected to be released soon.

Biden has argued that the sweeping mandates will help end a pandemic that has claimed the lives of more than 740,000 Americans.

But Republicans nationwide have opposed the vaccination requirements and have threatened to bring similar legal challenges.

On Wednesday, 21 Republican state attorneys general sent a letter to the president saying they think his vaccination mandate for federal contractors “stands on shaky legal ground,” is confusing to contractors and could exacerbate supply-chain problems.