In Africa, Blinken sees limits of US influence abroad 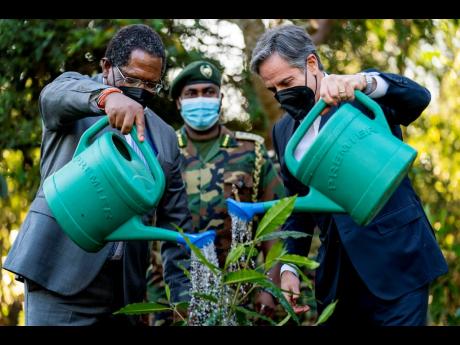 AP
Secretary of State Antony Blinken (right) and Kenya’s Cabinet Secretary for the Ministry of Environment and Forestry Keriako Tobiko plant a tree together during a visit to the Karura Forest in Nairobi, Kenya on November 17.

Blinken confronted authoritarianism, growing threats from newly energised extremists, and persistent challenges posed by COVID-19 and climate change, all of which have stubbornly resisted various US interventions.

And, nowhere on his three-nation tour last week – to Kenya, Nigeria and Senegal – was he able to escape obvious signs of the intense competition between the US and China: a geopolitical power struggle that has been playing out largely in China’s favour for the past two decades, especially in Africa.

Before leaving the continent at his last stop in Senegal, Blinken said he had been well received by all three leaders he met. But he allowed that “we have to be judged on what we do, not simply on what I say”.

The limits of Washington’s reach have been evident for some time but have been highlighted in recent months as President Joe Biden has promoted an ‘America is back’ narrative, intended to signal a US return to the international arena and institutions that his predecessor had eschewed.

In Nairobi, much of the secretary’s visit and drives through the Kenyan capital took place in the shadow of, or literally underneath, a massive, Chinese-financed elevated expressway construction project.

In Abuja, Blinken’s motorcade from the airport passed the giant and unmissable headquarters building of the Chinese Chamber of Commerce in Nigeria, where a top official spoke only partially in jest of playing the US and China off of each other and China’s attractiveness as a partner.

And, in Senegal, the capital Dakar was gearing up to host a major China-Africa trade and investment event less than 10 days after Blinken’s departure on Saturday.

While the Biden administration’s efforts to help African nations combat the coronavirus pandemic and encourage climate-friendly policies appear to be making some initial progress, the broader picture is less encouraging.

A new wave of authoritarianism has reversed some positive democratisation trends, despite very public US appeals and protests that have been ignored or only partially heeded by leaders in Ethiopia, Sudan and elsewhere, who have appeared unconvinced or uninterested in the administration’s message.

He cited Ethiopia and Sudan as prime examples.