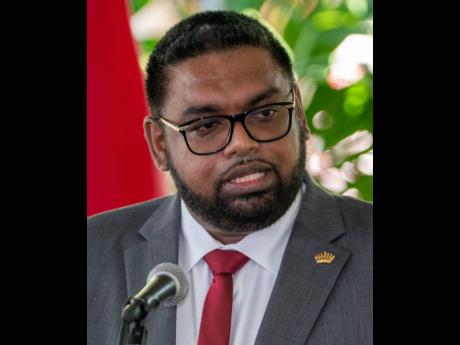 President Irfaan Ali Friday urged trade unions to accept the seven per cent salary increases for public workers even as the Guyana Trades Union Congress (GTUC) has called on the government to commit to paying the entire GUY$10 billion (one Guyana dollar=US$0.004 cents) approved by the National Assembly earlier this year for salary increase to public servants.

“I appeal to the unions to take off their political hat and put on their hat of reality, the hat of fairness and, in a comprehensive way, they too should applaud the government,” Ali said.

He dismissed as being “far from the truth” claims that the National Assembly had approved the GUY$10 billion for salary increases, saying that although the monies were listed under a line item, it also addresses year-round adjustments to wages and emoluments and caters for new employees in the public sector.

“I am pleased to announce now, that your government will be paying an across-the-board increase of seven per cent to public servants, teachers, members of the disciplined services, constitutional office holders, as well as government pensioners,” senior minister in the Office of the President with responsibility for finance, Dr Ashni Singh, said.

He said work will start immediately to ensure that it is processed and paid to eligible employees together with their December salary and in time for the festive Christmas season.

But in a letter to Ali, the GTUC noted that although GUY$10 billion had been budgeted and passed for the 2021 increases, the recent seven per cent salary increase only amounts to GUY$4.2 billion, leaving the remaining GUY$5.8 billion unaccounted.

“The seven per cent proposal amounts to about $4.2 billion (gross) cost to the treasury. This amount is taxed, so the treasury claws back some of this money; in the circumstances, and based upon consultations within our unions, we now urgently request a meeting with you to discuss the way forward,” GTUC President Lincoln Lewis wrote in the November 23 letter.

The GTUC has also asked Ali to facilitate a return to collective bargaining, as required by International Labour Organisation Conventions.

Government has refused to negotiate salary increases with unions that are representing public-sector workers.

But Ali said in light of global economic conditions, many other countries have suspended wage negotiations while others like the United Kingdom have frozen wages from 2020 to 2022, and a number of Caribbean Community countries have not increased wages since 2015, while others have offered a four per cent wage hike.

Ali said select categories of public servants are expected to get further increases in salaries next year, after a staff rationalisation is completed based on qualifications and comparable positions across.

“This is for the specialised skill sets, the specialised education sets that the country needs,” he said, reminding the nation that under the last administration public servants received a five per cent increase, and the unions were quiet.

“The unions went quiet, they went silent, they went dead,” Ali said in the broadcast from the lawns of State House.

Ali also announced that frontline workers in the local health sector will benefit from a GUY$400 million payout.