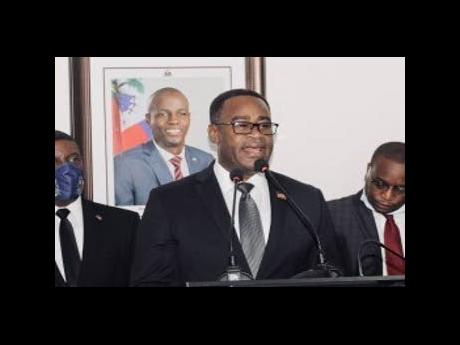 Haiti’s new justice minister, Berto Dorcé, has been sworn into office promising to work for a strong, independent, and efficient justice system.

Dorcé was appointed on Wednesday following the decision by Prime Minister Ariel Henry to re-shuffle his Cabinet, appointing eight new ministers in a Cabinet that now only includes four women, one less than before in the 18-member Cabinet.

Henry warned that difficult decisions lay ahead given the complex situation in Haiti and said his administration is doing the best it can to ensure public safety with the resources it has.

“We are doing the maximum with the funds that we have available to restore the authority of the state and put away the ones that need to be put away,” he said, adding “one of the main responsibilities of this government is to create a safe and stable environment”.

Addressing the swearing in ceremony, Dorcé said he is committed to working towards a strong, independent, and efficient justice system that is accessible to all and functioning without any political influence.

He said his priority would be to deal with the spate of kidnappings carried out by armed gangs, with the Chief of Staff of the Prime Minister Samuel Saturné, reminding the new justice minister of the major projects that await him, the priorities of the government, in particular, security, elections, the fight against prolonged preventive detention and land insecurity.

In September, Henry, who is facing increased scrutiny from authorities investigating the July 7 assassination of President Jovenel Moise, fired Rockfeller Vincent as his justice minister, just hours after another top official resigned and accused Henry of obstructing justice in a sharply worded letter.

Meanwhile, critics have dismissed the Cabinet re-shuffle with former legislator, Steven Benoit, calling it an “improved version” of the Tet Kale party, considering that this ministerial cabinet “is the same regime which has been in power since 2011”.