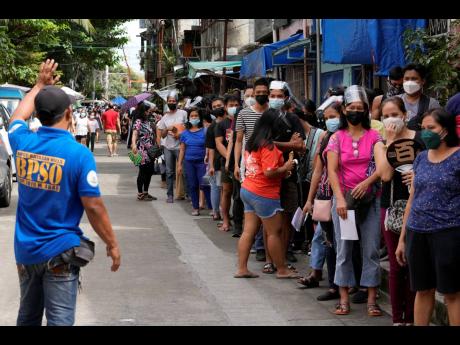 AP
Residents wait to be inoculated with COVID-19 vaccines outside a school during the first day of a nationwide three-day vaccination drive in Quezon city, Philippines on Monday.

The World Health Organization (WHO) warned Monday that the global risk from the Omicron variant is “very high” based on early evidence, saying the mutated coronavirus could lead to surges with “severe consequences”.

The UN health agency, in a technical paper issued to member states, said “considerable uncertainties” remain about the variant that was first detected days ago in southern Africa. But it said it is possible the variant has mutations that could enable it to escape an immune-system response and boost its ability to spread from one person to another.

“Depending on these characteristics, there could be future surges of COVID-19, which could have severe consequences, depending on a number of factors, including where surges may take place,” it added. “The overall global risk ... is assessed as very high.”

The warning came as a widening circle of countries around the world reported cases of the variant and moved to slam their doors shut while scientists race to figure out just how dangerous this version might be.

Japan announced it would bar entry of all foreign visitors, joining Israel in doing so just days after the variant was identified by researchers in South Africa. Morocco banned all incoming flights. Other countries, including the US and European Union members, have moved to prohibit travellers arriving from southern Africa.

If the virus proves dangerous as feared, “the impact on vulnerable populations would be substantial, particularly in countries with low vaccination coverage,” WHO said, noting that no deaths linked to Omicron have been reported so far.

“Many of us might think we are done with COVID-19. It’s not done with us,” warned Tedros Adhanom Ghebreyesus, WHO’s director-general.

The infections have underscored the difficulty in keeping the virus in check in a globalised world of jet travel and open borders. Yet, many countries are trying to do just that, against the urging of the WHO, which noted that border closings often have limited effect and can wreak havoc on lives and livelihoods.

Some argued that such restrictions could provide valuable time to analyse the new variant. Little is known about it, including whether it is more contagious, more likely to cause serious illness or more able to evade vaccines.

While the initial global response to COVID-19 was criticised as slow and haphazard, the reaction to the new variant came quickly.