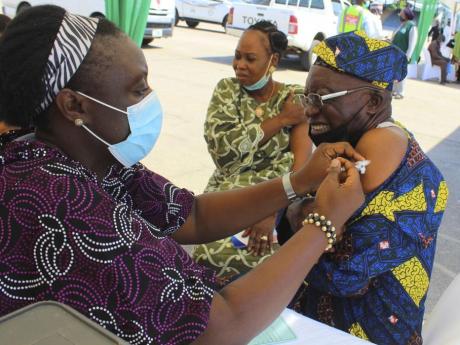 LAGOS, Nigeria (AP) — Nigeria has detected its first case of the omicron coronavirus variant in a sample it collected in October, weeks before South Africa alerted the world about the variant last week, the country's national public health institute said Wednesday.

It is the first West African country that has recorded the omicron variant since scientists in southern Africa detected and reported it and adds to a list of nearly 20 countries where the variant has been recorded, triggering travel bans across the world.

Genomic sequencing of positive cases of COVID-19 among incoming international travellers has confirmed an omicron case dating back to October, the Nigeria Center for Disease Control said in a statement issued by its director-general.

Nigeria has also identified two cases of the omicron variant among travellers who arrived from South Africa last week,

Much remains unknown about the new variant, including whether it is more contagious, as some health authorities suspect, whether it makes people more seriously ill and if it can thwart the vaccine.

The Nigeria CDC urged the country's states and the general public to be on alert and called for improved testing amid concerns that Nigeria's low testing capacity might become its biggest challenge in the face of the new variant.

Testing for the virus is low in many states and even in the nation's capital, Abuja.

For instance, in parts of Kuje, a suburb of Abuja, Musa Ahmed, a public health official, told The Associated Press that no one has been tested for the virus for weeks.

The detection of the omicron variant in Africa's most populous nation, with 206 million people, coincides with Nigeria's new requirement that all federal government employees must be inoculated or present a negative COVID-19 test result done in the last 72 hours.

With the vaccine mandate taking effect on Wednesday, there were chaotic scenes at several offices in the nation's capital as civil servants without a vaccination card or a negative PCR test were turned away by security agents.

Many of the workers and security agents were not wearing face masks.

“If public servants are convinced about these issues, they are naturally more effective advocates to their constituents.”

Across Nigeria, the news of the omicron variant — which the World Health Organization has warned poses “very high” risk — has triggered concerns and renewed fears over the COVID-19 pandemic.

At the airport in Lagos, Nigeria's largest city and economic hub, authorities insisted that travellers must wear their face masks at the counters, though not much attention is paid to many others flouting health protocols around the airport premises and in the city.

Nigeria — with 214,218 confirmed infections including nearly 3,000 deaths — has updated its travel advisory, ordering incoming international travellers to have a PCR test 48 hours before embarking on their trip to the country and two more tests, two days and seven days after arrival. Incoming international arrivals must also isolate for seven days.

Amid global concern over the omicron variant, the Nigeria CDC director-general told reporters that the country remains at alert in the face of the emerging crisis.

“We are working very hard to enhance ongoing surveillance, especially for inbound travellers, and also trying to ramp up testing (including) at the land borders,” he said.

A slew of nations moved to ban travels from many countries especially southern African nations in the aftermath of the emergence of the omicron variant. But the move has been widely condemned by many including South Africa President Cyril Ramaphosa, who is currently in Nigeria on a two-day visit.

Further west on the continent, Liberia launched surveillance along its borders and placed health officers assigned there on full alert although no cases of the omicron variant have been reported there.

She urged them to take advantage of the vaccination campaign.

“You cannot go to war if you are not prepared for the war,” she said. “And our preparation for this war against COVID-19 — whether it is alpha, delta or omicron — is to protect ourselves by getting at least a jab in your arm ... so we just want to raise this heightened alert.”