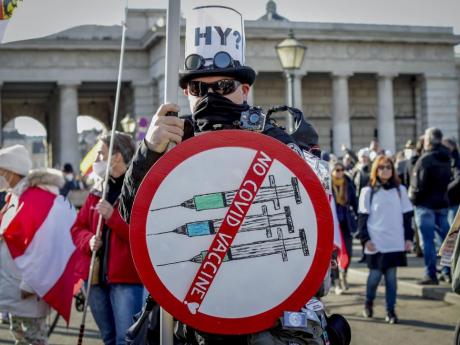 A man takes part in a demonstration against the country's coronavirus restrictions in Vienna, Austria, Saturday, November 20, 2021. The coronavirus's omicron variant kept a jittery world off-kilter Wednesday, December 1, 2021, as reports of infections linked to the mutant strain cropped up in more parts of the globe, and one official said that the wait for more information on its dangers felt like “an eternity.” (AP Photo/Lisa Leutner, File)

PARIS (AP) — Greeks who are over age 60 and refuse coronavirus vaccinations could be hit with monthly fines of more than one-quarter of their pensions — a get-tough policy that the country's politicians say will cost votes but save lives.

In Israel, potential carriers of the new omicron variant could be tracked by the nation's domestic security agency in seeming defiance of a Supreme Court ruling from the last go-round.

Weekly protests in the Netherlands over the country's 5 p.m. lockdown and other new restrictions have descended into violence, despite what appears to be overwhelming acceptance of the rules.

With the delta variant of COVID-19 pushing up cases in Europe and growing fears over the omicron variant, governments around the world are weighing new measures for populations tired of hearing about restrictions and vaccines.

It's a thorny calculus made more difficult by the prospect of backlash, increased social divisions and, for many politicians, the fear of being voted out of office.

“I know the frustration that we all feel with this omicron variant, the sense of exhaustion that we could be going through this all over again,” British Prime Minister Boris Johnson said Tuesday, two days after the government announced that masks would be mandatory again in stores and on public transportation and required all visitors from abroad to undergo a COVID-19 test and quarantine.

“We're trying to take a balanced and proportioned approach.”

New restrictions, or variations on the old ones, are cropping up around the world, especially in Europe, where leaders are at pains to explain what looks like a failed promise: that mass vaccinations would mean an end to widely loathed limitations.

“People need normality. They need families, they need to see people, obviously safely, socially distancing, but I really think, this Christmas now, people have had enough,” said Belinda Storey, who runs a stall at a Christmas market in Nottingham, England.

In the Netherlands, where the curfew went into effect last week, mounted police patrol to break up demonstrations against the new lockdown, which is among the world's strictest. But most people appeared resigned to rush through errands and head home.

“The only thing we can do is to listen to the rules, follow them and hope it's not getting worse. For me it's no problem. I'm a nurse. I know how sick people get,” said Wilma van Kampen.

In Greece, residents over 60 face fines of 100 euros ($113) a month if they fail to get vaccinated. The fines will be tacked onto tax bills in January.

About 17% of Greeks over 60 are unvaccinated despite various efforts to prod them to get their shots, and nine in 10 Greeks currently dying of COVID-19 are over 60.

Employing a carrot instead of a stick, Slovakia's government is proposing to give people 60 and older a 500-euro ($568) bonus if they get vaccinated.

In Israel, the government this week approved resuming the use of a controversial phone-monitoring technology to perform contact tracing of people confirmed to have the omicron variant.

Israeli rights groups have decried the use of the technology as a violation of privacy rights, and others have noted that its accuracy in indoor places is flawed, leading to large numbers of people being wrongly flagged. The Supreme Court earlier this year issued a ruling limiting its use.

“We need to use this tool in extreme situations, and I am not convinced we are in that kind of situation,” Justice Minister Gideon Saar told Israeli public broadcaster Kan this week.