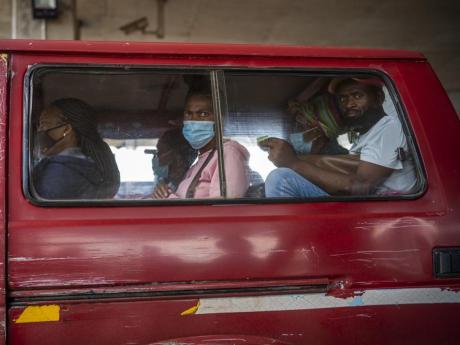 Passengers, some wearing masks, wait for their taxi to leave the Baragwanath taxi rank in Soweto, South Africa, Thursday, December 2, 2021. South Africa launched an accelerated vaccination campaign to combat a dramatic rise in confirmed cases of COVID-19 a week after the omicron variant was detected in the country. (AP Photo/Jerome Delay)

JOHANNESBURG (AP) — South Africa has accelerated its vaccination campaign by giving jabs at pop-up sites in shopping centres and transportation hubs to combat a rapid rise in new COVID-19 cases a week after the discovery of the omicron variant of the coronavirus.

New daily cases nearly doubled to 8,561 Wednesday, from 4,373 a day earlier, according to official statistics. Scientists said they were bracing for the surge to continue.

“We want families to be safe this festive season,” Minister of Health Joe Phaahla said Thursday.

“Before you go home, before you leave on vacation, make sure you protect yourself and those you love. If you visit your parents and they have not yet been vaccinated, go with them to your closest vaccination site. It could save their lives.”

Gauteng province, where South Africa's largest city, Johannesburg, and the capital, Pretoria, are located, is a hotspot of new infections, with more than 70% of the new cases.

Gauteng officials say they were “preparing for the worst” by increasing hospital beds and reopening some field hospitals in anticipation of increased admissions of COVID-19 patients.

Tests indicate the omicron variant, which was first reported in Southern Africa, is spreading quickly and is now in five of South Africa's nine provinces.

It is not known how many of the new daily cases involve omicron because scientists can only do full genetic sequencing on a small number of positive tests.

However, it appears that omicron is “rapidly becoming the dominant variant” in South Africa, according to a statement issued by the National Institute for Communicable Diseases.

The institute said that 74% of the 249 samples sequenced in November were identified as omicron.

In October, before omicron was discovered, the delta variant was the dominant form of the coronavirus in South Africa.

Scientists in South Africa and around the world are doing genetic sequencing of omicron samples to learn more about the variant.

Much remains unknown about omicron, including whether it is more contagious, as some health authorities suspect, if it makes people more seriously ill or whether existing vaccines are effective against it.

Gauteng Premier David Makhura said Thursday he was encouraged to see more people getting vaccinated, with the province recording at least 50,000 vaccinations daily this week.

However, about half of the province's 16 million people remain unvaccinated, Makhura said.

The number includes many migrants who are in South Africa without authorisation and therefore are unable to get vaccinated because they cannot be recorded in the digital vaccination system, he said.

About 36% of adults in South Africa are fully vaccinated, according to official statistics.

The country now has 19 million doses of the Pfizer-BioNTech and the Johnson & Johnson vaccines, but the pace of vaccinations has slowed.