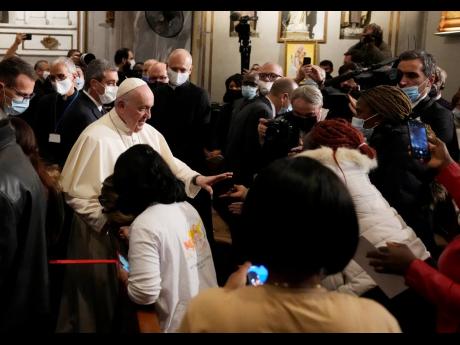 Alessandra Tarantino
Pope Francis salutes faithful at the end of an ecumenical prayer with migrants at the Parish Church of the Holy Cross in Nicosia, Cyprus yesterday.

Pope Francis on Friday denounced the “indifference” that the West shows migrants as the Vatican confirmed at least a dozen asylum-seekers would be transferred from Cyprus to Italy, in a gesture of solidarity with countries that have borne the brunt of receiving would-be refugees.

The Vatican said the Rome-based Sant’Egidio Community, working with governments, had arranged to bring the would-be refugees from the Mediterranean island nation to Italy in the coming weeks, though it only said 12 would be transferred. Earlier, the Cypriot Interior Ministry had thanked Francis and the Holy See for the initiative to relocate 50 people, saying it was a recognition of Cyprus’ inability to continue to absorb an influx of migrants.

The Vatican didn’t immediately respond when asked about the discrepancy, though presumably more could eventually be transferred since Sant’Egidio, for years, has run relocation and “humanitarian corridor” services to bring migrants to Italy legally.

Cyprus’ Interior Minister Nicos Nouris insisted to The Associated Press that arrangements had been made to transfer 50 migrants in total.

Francis himself didn’t confirm the initiative during a Friday evening prayer service with migrants on his second day in Cyprus. But he made it clear that countries had a moral obligation to accept those who are fleeing war, hatred and oppression – often to find themselves rejected, returned or coming face to face with barbed wire fencing.

“He who comes asking for freedom, bread, help, fraternity and joy, who is fleeing hatred, finds himself in front of a hatred which is called barbed wire,” Francis told the migrants, who took up most of the pews in the Nicosia church. “May the Lord awaken the conscience of all of us in front of all these things. We cannot be silent and look away at this culture of indifference.”

Francis referred to the problems Cyprus was undergoing, saying he recognised that governments can’t take in everyone and that “we have to understand the limits”.

But he also voiced disgust at how the “developed civilisations of the West” refuse to accept migrants or send them back to countries where they would be “confined, tortured and enslaved”.