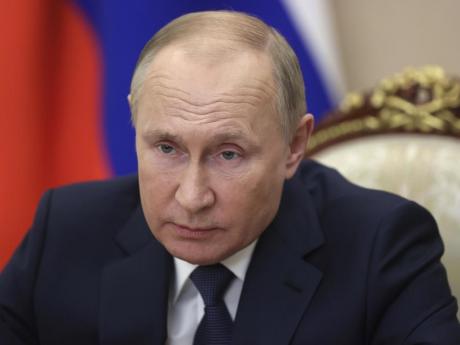 MOSCOW (AP) — Russian President Vladimir Putin on Sunday voiced hope for a quick approval of the country's Sputnik V coronavirus vaccine by the World Health Organization, saying the move is essential to expand its global supplies.

Speaking during a video call with Francesco Rocca, president of the International Federation of Red Cross and Red Crescent Societies, Putin said receiving the WHO's vetting is necessary to spread the Russian vaccine more broadly around the world, including free supplies.

“We intend to expand such assistance,” Putin said.

The Russian leader also argued that WHO's approval should open the door for Russians and others who have had the Sputnik V vaccine to travel more freely around the world. He said about 200 million people worldwide have received Sputnik V.

Putin was vaccinated with Sputnik V in the spring, and last month he received a booster shot of Sputnik Light, the one-dose version.

He also said he took an experimental nasal version of Sputnik V days after receiving his booster shot, adding that he was feeling fine and felt no side effects.

The Gamaleya Institute that developed Sputnik V has said the vaccine should be efficient against the omicron variant of COVID-19 but announced that it will immediately start working on adapting it to counter the new variant.

Russia was the first country in the world to authorise a coronavirus vaccine, launching Sputnik V in August 2020, and has plentiful supplies. But uptake has been slow, blamed in part on conflicting signals from Russian authorities.

Russia in recent months has faced its deadliest and largest surge of coronavirus cases, with infections and deaths climbing to all-time highs and only slowing in the last few weeks.

Russia has Europe's highest confirmed pandemic death toll at over 281,000, according to the government's coronavirus task force.

But a report released Friday by the state statistics agency Rosstat, which uses broader criteria, put the overall number of virus-linked deaths between April 2020 and October 2021 to over 537,000 — almost twice the official toll.

Putin, who despite a surge in infections in Russia has repeatedly argued that vaccinations should remain voluntary, emphasised Sunday that Russian authorities have been tried to use “persuasion and not pressure” and worked to dispel “prejudices and myths driving the aversion to vaccination.”

Russia's quick approval of Sputnik V drew criticism abroad, because at the time it had only been tested on a few dozen people. But a study published in British medical journal The Lancet in February showed the Sputnik V is 91% effective and appears to prevent inoculated individuals from becoming severely ill with COVID-19.

Russia has actively promoted Sputnik V around the world but faced bottlenecks in shipping the amounts it promised. Countries in Latin America have complained about delays in getting the second Sputnik V shot.

The World Health Organization has been reviewing data about Russia's Sputnik V vaccine as part of the approval process.

Such approval could pave the way for its inclusion into the COVAX program that is shipping COVID-19 vaccines to scores of countries around the world based on need.