Pope comforts migrants, calls for more to be done 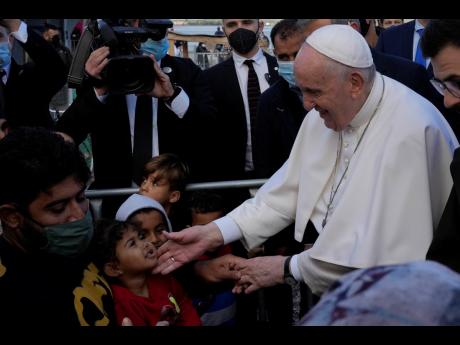 AP
Pope Francis meets migrants during his visit at the Karatepe refugee camp, on the northeastern Aegean island of Lesbos, Greece.

Pope Francis returned Sunday to the Greek island of Lesbos to offer comfort to migrants at a refugee camp and blast what he said was the indifference and self-interest shown by Europe “that condemns to death those on the fringes”.

“Please, let us stop this shipwreck of civilisation!” Francis said at the Mavrovouni camp, a cluster of white U.N. containers on the edge of the sea lined by barbed wire fencing and draped with laundry hanging from lines.

Arriving at the camp, a maskless Francis took his time walking along the barricades, patting children and babies on the head and posing for selfies. He gave a “thumbs up” after he was serenaded by African women singing a song of welcome.

It was Francis’ second trip to Lesbos in five years and he lamented that little had changed since 2016, when Lesbos was at the heart of a massive wave of migration to Europe and Francis brought 12 Syrian Muslim refugees home with him aboard the papal plane.

That concrete gesture of solidarity had raised hopes among the current residents of the Lesbos camp, many of whom have given birth to children here while waiting for their asylum claims to be processed and saw in Francis’ visit a chance at finally getting out.

“It is a grace for us that the Pope is coming here. We have a lot of problems here as refugees, a lot of suffering,” said Enice Kiaku from Congo, whose two-year-old son on her lap was born on Lesbos. But like little Guilain, she has no identity documents and is stuck.

“The arrival of the Pope here makes us feel blessed because we hope the Pope will take us with him because here we suffer,” Kiaku said as she waited in a tent for the pope to arrive.

But no papal transfers were announced this time around, though during the first leg of Francis’ trip in Cyprus, the Vatican announced that 12 migrants who had crossed over from the breakaway Turkish Cypriot north would be relocated to Italy in the coming weeks. Cypriot officials said a total of 50 would eventually be sent.

Francis’ five-day trip to Cyprus and Greece has been dominated by the migrant issue and Francis’ call for European countries to stop building walls, stoking fears and shutting out “those in greater need who knock at our door”.

“I ask every man and woman, all of us, to overcome the paralysis of fear, the indifference that kills, the cynical disregard that nonchalantly condemns to death those on the fringes!” he said. “Let us stop ignoring reality, stop constantly shifting responsibility, stop passing off the issue of migration to others, as if it mattered to no one and was only a pointless burden to be shouldered by somebody else!”

He denounced that the Mediterranean Sea, “the cradle of so many civilisations,” had become a vast cemetery where smuggling boats packed with desperate people sink. “Let us not let our sea ( mare nostrum) be transformed into a desolate sea of death ( mare mortuum),” he said.