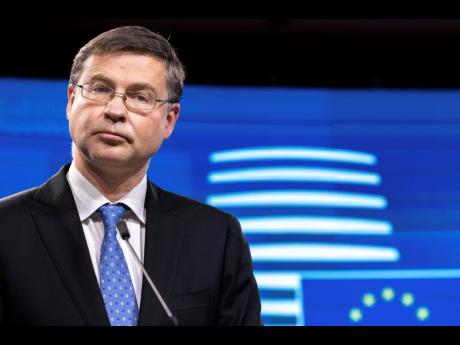 The European Union moved on Wednesday to set up a system of quick-fire trade sanctions that it could impose on any foreign power, like China, that it accuses of trying to coerce the 27-country bloc for economic or political gain.

The EU’s executive branch, the European Commission, manages trade with the outside world on behalf of member nations. It’s seeking their permission to react without needing the endorsement of all 27 when any person, company or country tries to strong-arm the bloc. It could face pushback from some EU countries against giving the commission too much power.

The commission says it might be possible to use such a system in China’s spat with Lithuania, whose ties with Taiwan have prompted Beijing to downgrade diplomatic relations with the EU member. Lithuania says its trade shipments are no longer being cleared through Chinese customs.

China and Taiwan split during a civil war in 1949, and Beijing threatens to use force to bring the island under its control.

“China is restricting trade with Lithuania,” Executive Vice-President Valdis Dombrovskis said as he unveiled the plan. “Clearly, there could be a reason to do the assessment whether this constitutes economic coercion and correspondingly, whether this instrument would be applicable.

“Unity and solidarity within the EU remain key to upholding our interests and our values,” Dombrovskis told reporters. “The EU is ready to stand up against all types of political pressure and coercive measures applied against any member state.”

The new system would give the commission the power to impose punitive tariffs, quotas or even limit access to EU markets to deter countries from trying to restrict trade or investment to force a change of EU policy.

It argues that without such a capacity, the EU will fall back on its standard use of diplomatic pressure, which is far slower and requires all 27 member countries to agree.

Under the plan, Brussels would investigate whether a trade or economic act constitutes coercion, contact the coercing country to try to resolve the issue, then take countermeasures if no solution is found. Such action would probably still take months, rather than weeks.

Commission officials are wary of saying what exactly might trigger the “anti-coercion instrument”, but they say it would not be used for something like the Trump administration’s 2018 decision to slap steel and aluminium tariffs on the EU because its products were seen as a threat to United States national security.

The commission believes it had sufficient redress through the World Trade Organization and was able to impose counter-duties on US-made motorcycles, bourbon, peanut butter and jeans, among other items.

The system is likely to take months to be approved, if it does at all. EU member countries, some of whom – like Hungary and Poland – have complained about the commission getting too much power, and the European Parliament must now formulate their positions and negotiate with the commission.

The chairman of the EU assembly’s trade committee, Bernd Lange, welcomed the plan.

“The EU is facing geopolitical realities: the recent months and years have illustrated how trade policy is increasingly used as a political weapon. There is a gap in our toolbox that others can exploit,” he warned.