Africa CDC in talks with Pfizer for COVID treatment pill 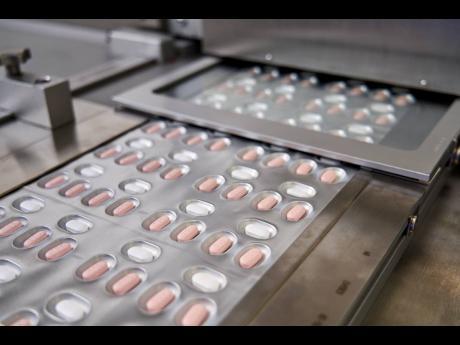 This image provided by Pfizer shows its COVID-19 pills. Drugmaker Pfizer said yesterday that it is submitting its experimental pill for US authorization, setting the stage for a likely launch in coming weeks.

DAKAR, Senegal — (AP) — The director of Africa's Centers for Disease Control said the organisation is talking to Pfizer about bringing its COVID-19 treatment pill to the continent, which has just passed 10 million cases.

The discussions come as Dr John Nkengasong urges the government and citizens not to relent on vaccinations and preventive measures as various countries come down from waves of increased infections from the omicron variant.

“We are working hand in hand. ... We are in close discussions with Pfizer to see what can be done to make the drugs available on the continent,” Nkengasong said Thursday in a press briefing.

He said he hopes the treatment would help stressed health systems on the continent and would be part of an approach in 2022 that includes scaling up vaccines and expanding testing to help deal with the pandemic.

At least 39 countries have reported the new variant and the average increase of cases in Africa is about 11 percent, he said.

He noted that vaccination rates are still not high enough, saying governments are struggling because there are such high numbers of people only getting vaccinated when there is a peak, which leads to a lot of hospitalisations and pressure on the systems that can be avoided.

The strategy on countering COVID-19 in Africa is first vaccination, but “with the coming of new drugs, it appears it would be possible and recommended to treat even the mild cases,” WHO Africa regional emergency director Abdou Salam Gueye told reporters Thursday.

WHO added that “after a six-week surge, Africa's fourth pandemic wave driven primarily by the omicron variant is flattening, marking the shortest-lived surge to date.” Deaths are lower than in the previous waves and hospitalisations remain low, WHO noted.

Africa has now recorded more than 10.1 million cases of coronavirus with 232,363 deaths across more than 50 countries, according to the Africa CDC.