Djokovic back in detention, continues to fight deportation 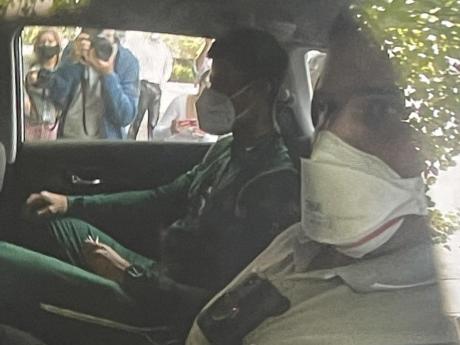 MELBOURNE, Australia (AP) — Novak Djokovic was back in immigration detention Saturday after his legal challenge to avoid being deported from Australia for being unvaccinated for COVID-19 was moved to a higher court.

A Federal Court hearing has been scheduled for Sunday, a day before the men's No. 1-ranked tennis player and nine-time Australian Open champion was due to begin his title defence at the first Grand Slam tennis tournament of the year.

Djokovic and his lawyers had a morning meeting with immigration officials and, by mid-afternoon, Australian media reported the tennis star was taken back into detention.

Television footage showed the 34-year-old Serb wearing a face mask as he sat in a vehicle near an immigration detention hotel.

He spent four nights confined to a hotel near downtown Melbourne before being released last Monday when he won a court challenge on procedural grounds against his first visa cancellation.

Immigration Minister Alex Hawke on Friday blocked the visa, which was originally revoked when he landed at a Melbourne airport on January 5.

Deportation from Australia can lead to a three-year ban on returning to the country, although that may be waived, depending on the circumstances.

Djokovic has acknowledged that his travel declaration was incorrect because it failed to indicate that he'd been in multiple countries in the two-week period before his arrival in Australia.

But that wasn't why Hawke decided that deporting Djokovic was in the public interest.

Lawyers for Djokovic filed documents in court that revealed Hawke had stated that the tennis star “is perceived by some as a talisman of a community of anti-vaccination sentiment.”

Australia has one of the highest COVID-19 vaccination rates in the world.

But the minister said Djokovic's presence in Australia may be a risk to the health and “good order” of the Australian public and “may be counterproductive to efforts at vaccination by others in Australia.”

The minister cited comments Djokovic made in April 2020 that he was “opposed to vaccination” and had wouldn't want to be forced by someone to take a vaccine to compete.

Djokovic's lawyers argued that the minister had cited no evidence that Djokovic's presence in Australia may “foster anti-vaccination sentiment.”

Hundreds of activists held a peaceful rally outside the Melbourne Park complex that hosts the Australian Open, and planned another for Monday.