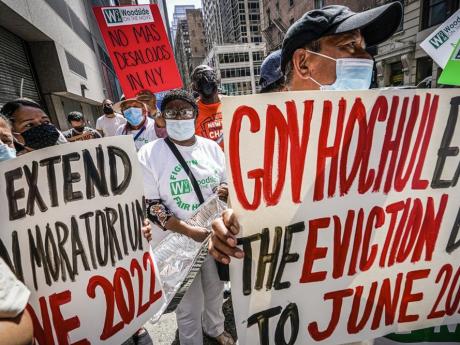 Activists rally and demonstrate calling for an extension of the pandemic eviction moratorium, Tuesday, August 31, 2021. New York tenants and homeowners lost some protection from eviction and foreclosure Saturday, January 15, 2022, as the state ended a coronavirus pandemic moratorium aimed at keeping New Yorkers from losing their homes. (AP Photo/Mary Altaffer, File)

NEW YORK (AP) — New York tenants and homeowners lost some protection from eviction and foreclosure Saturday as the state ended a nearly 2-year-old moratorium aimed at keeping New Yorkers from losing their homes during the coronavirus pandemic.

Advocates and landlords don't expect a flood of evictions right away, as the state's Emergency Rental Assistance Program still provides some eviction protection.

Still, Joe Loonan, housing campaigns coordinator for advocacy group VOCAL-NY, warned that the state is setting the ground for a homelessness crisis over the next year.

“I think we'll see in a year that the shelter system has grown exponentially because so many people will have entered after the eviction moratorium, and people will be staying in the system much longer than they have before,” he said.

Landlords, however, said it was time to end the eviction ban, arguing that tenants could raise financial hardship claims in court.

The moratorium had paused most evictions until Jan. 15, except in cases in which landlords claimed tenants were damaging property or becoming a safety hazard. It covered hundreds of thousands of homeowners and commercial and residential tenants, who still have some protections from eviction and foreclosure.

New York previously allowed tenants to file court papers saying they had a financial hardship because of the coronavirus pandemic, and to use that hardship as a defence in eviction proceedings.

It was up to landlords to prove a tenant didn't have a financial hardship.

The state initially stopped accepting rental assistance applications on November 15, but a judge ordered officials last week to reopen the application portal for now, while the court considers a lawsuit filed by tenants and the Legal Aid Society.