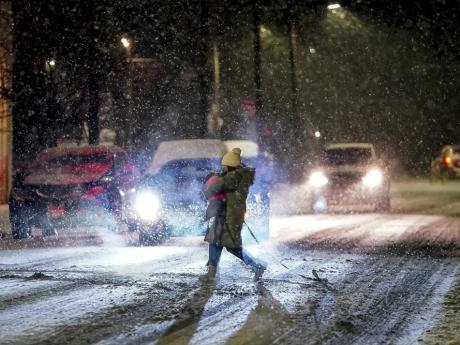 A person carries a dog as they cross Butler Street in Lawrenceville a neighborhood in Pittsburgh as snow falls during a winter storm on Sunday night.

A foot (30 centimetres) of snow was forecast for parts of New England, New York state, Ohio and Pennsylvania through Tuesday morning, and more than 80,000 customers in the region were without power as of Monday morning.

The city advised people not to travel if they didn't need to on this Martin Luther King Jr. Day, while some surrounding towns instituted a travel ban.

“WOW! (Latest) snow measurement at 1 AM was 4.6 inches in the last hour at the Buffalo Airport!” the National Weather Service in Buffalo tweeted overnight.

“And tack on another 4 inches in the last hour ending at 2 AM! Total so far since late Sun evening - 10.2 inches.”

New York City and Boston were spared the heaviest snowfall, which was accumulating at higher elevations in western Massachusetts, eastern Pennsylvania and parts of New England.

A severe thunderstorm warning remained in effect for New York City early Monday, and high winds made travel treacherous across the region.

“We've had a very strong area of low pressure that's kind of moved up the coast, with pretty heavy snowfall accumulations from Tennessee, North Carolina all the way into the northeast,” said meteorologist Marc Chenard at the weather service's headquarters in College Park, Maryland.

The highest snowfall accumulations so far have been in the North Carolina mountains, at over a foot, Chenard said.

Sleet and rain were the main threats for much of Massachusetts, Connecticut and Rhode Island.

Wet roadways in the South were expected to refreeze Monday, creating icy conditions for motorists.

Plow trucks were scattered along roads and highways up the East Coast, working to clear the way for travellers.