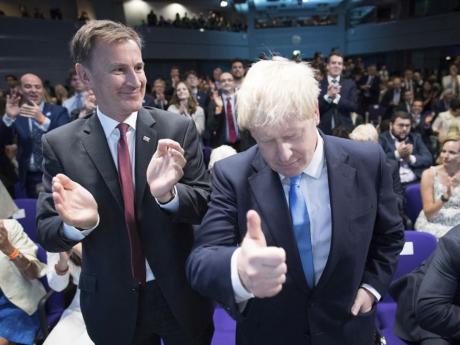 Jeremy Hunt, left, congratulates Boris Johnson after the announcement of the result in the ballot for the new Conservative party leader, in London, July 23, 2019.

Revelations that Prime Minister Boris Johnson and his staff partied while Britain was in a coronavirus lockdown have provoked public outrage and led some members of his Conservative Party to consider ousting their leader.

If they manage to push Johnson out — or if he resigns — the party would hold a leadership contest to choose his replacement.

Here's a look at who could rise if Johnson falls:

Sunak, 41, is widely regarded as the brightest rising star in the party, the best known of the contenders to the public — and the bookies' favorite to succeed Johnson.

Sunak was thrust into the spotlight when he became treasury chief in early 2020, tasked with the unenviable job of steering the British economy through its worst economic slump on record due to the pandemic.

Sunak has dished out billions of pounds in emergency spending to help businesses and workers, and his pandemic policies have generally been seen in a positive light.

A big “Star Wars” fan, Sunak nurtures his personal brand with a slick Instagram account. Opinion polls have suggested that he is one of the most popular Conservative ministers among voters, though his elite education and past work for the investment bank Goldman Sachs and a hedge fund means some see him as out of touch with ordinary people.

He would be Britain's first prime minister who is not white. Born to Indian parents who immigrated to the U.K. from East Africa, Sunak attended the exclusive Winchester College private school, studied at Oxford University, and is married to Akshata Murthy, daughter of an Indian billionaire.
___

Truss, 46, took on the high-profile job of foreign secretary in September after serving as trade minister and has been gaining momentum as a contender since.

As well as serving as Britain's chief diplomat, she is the U.K.'s new lead negotiator with the European Union to deal with lingering issues following Britain's exit from the bloc.

Once a campaigner for remaining in the EU, Truss has become a fervent champion for Brexit. Her prior role as international trade secretary saw her signing post-Brexit trade deals around the world and channeling Johnson's ambitions for “Global Britain.”

Truss is popular with many Conservatives, who see in the free-market-loving politician echoes of the party's first female prime minister, Margaret Thatcher. Her supporters have coined the slogan “In Liz We Truss.”

She is less well known to the general public. “When you ask about Liz Truss, 50% of voters say 'Liz who?'” said Chris Curtis, a pollster at Opinium Research.

Javid, 52, has been health secretary since June, leading Britain's response to the COVID-19 pandemic.

Before that he served as treasury chief, but resigned in early 2020 after clashing with Johnson over the prime minister's order to fire his team of advisers.

The fact Johnson brought him back to the government to handle the coronavirus response reflects his reputation as a competent and safe pair of hands.

The son of Pakistani immigrants, Javid has billed himself as a common-man alternative to his private school-educated rivals — although he had a lucrative career in investment banking before entering politics.

As with Sunak, he'd make history if he were to win.

Gove, a party heavyweight, has held many key Cabinet posts and is currently in charge of delivering on the government's promise to “level up” Britain, that is, address inequality by increasing opportunities in deprived areas.

Gove, 54, played a key role in the campaign to take Britain out of the EU and is widely respected in the party, but not completely trusted. In the 2016 Conservative leadership campaign, he backed Johnson for leader before deciding he would rather run himself — a betrayal that many Conservatives have not forgotten.

To the public, he may be best known for being filmed dancing to techno music at a nightclub in Aberdeen, Scotland, in August, in a clip that drew a lot of chuckles when it went viral on social media.

Hunt, a former health secretary and foreign secretary, ran against Johnson in the 2019 leadership race, billing himself as the more sensible, serious candidate. He lost heavily, and was dumped from the Cabinet when Johnson took over.

In a recent interview, the 55-year-old was quoted as saying that his ambition to lead the country has not “completely vanished.”

He has remained a lawmaker, and kept himself in the public eye by grilling ministers and experts as head of the Health and Social Care Select Committee in Parliament.

As a critic of the government's response to the pandemic, he may appeal to those seeking a change from Johnson — though some look on him unfavorably for implementing unpopular policies when he was health secretary.