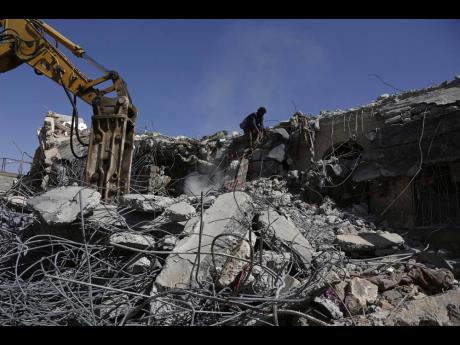 AP
People search the rubble of a prison facility hit by a Saudi-led coalition airstrike that killed at least 87 people, in a stronghold of Houthi rebels on the border with Saudi Arabia, in the northern Saada province of Yemen on Saturday.

Workers in war-wrecked Yemen recovered five more bodies from the rubble of a prison facility hit by a Saudi-led coalition airstrike, bringing the death toll to at least 87, an international aid group said Sunday.

Internet access, meanwhile, remained largely down after another Saudi-led coalition airstrike hit a telecommunications centre Friday at the Red Sea port city of Hodeida, according to advocacy group NetBlocks. The centre is key to Yemen’s connection to the Internet.

Ahmed Mahat, head of the Doctors Without Borders mission in Yemen, said rescuers completed their search efforts late Saturday at the site of the prison in Yemen’s northern province of Saada, a stronghold of Houthi rebels on the border of Saudi Arabia.

He said 266 people were wounded in the airstrike during an intense air and ground escalation in the country’s civil war.

Yemen’s conflict began in 2014, when the Iranian-backed Houthis took the capital, Sanaa, and much of northern Yemen, forcing the government to flee to the south, then to exile in Saudi Arabia. The Saudi-led coalition, backed at the time by the US, entered the war months later to try restoring the government to power.