UK to lift travel test requirements for the vaccinated 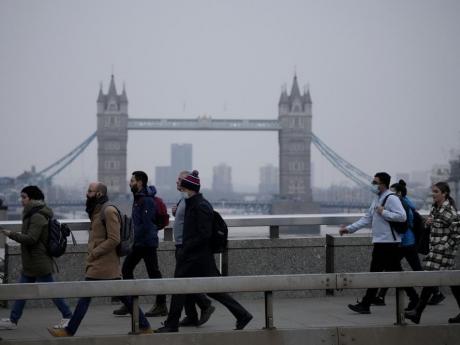 Workers walk over London Bridge towards the City of London financial district, backdropped by Tower Bridge, during the morning rush hour, in London, Monday, January 24, 2022. The British government has asked people to return to working in offices starting Monday as they ease coronavirus restrictions. (AP Photo/Matt Dunham)

Transport Secretary Grant Shapps is due to give details of the rule change later.

“Nearly two years since the initial COVID restrictions were introduced, today's announcement brings international travel towards near-normality for the fully vaccinated, and at last into line with hospitality and the domestic economy,” he said.

Currently, travellers who have had at least two vaccine doses must take a rapid coronavirus test within two days of arriving in the UK.

Those who are unvaccinated face stricter testing and quarantine rules.

The government had already eased travel rules earlier this month, removing the need to take a test before travelling to Britain and replacing lab-confirmed post-arrival PCR tests with cheaper rapid lateral flow tests.

The other parts of the UK — Scotland, Wales and Northern Ireland — set their own public health policies but have generally adopted the same travel rules as England.

Coronavirus cases in Britain soared in December, driven by the extremely transmissible omicron variant, though hospitalisations and deaths have remained well below previous pandemic peaks.

Britain has seen over 154,000 deaths in the pandemic, the second-worst toll in Europe after Russia.

Johnson's Conservative government is also lifting mask mandates and other restrictions this week and is relying on vaccinations and widespread testing to keep the virus in check.