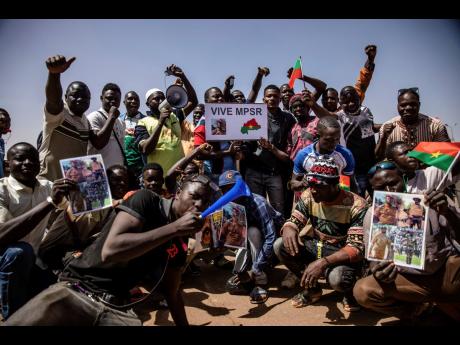 AP
People take to the streets of Ouagadougou, Burkina Faso, yesterday to rally in support of the new military junta that ousted democratically elected President Roch Marc Christian Kabore and seized control of the country.

Hundreds of people marched through the streets of Burkina Faso’s capital Tuesday in a show of support for the new military-led junta that ousted democratically elected President Roch Marc Christian Kabore and seized control of the country.

Days of gunfire and uncertainty in Ouagadougou ended Monday evening when more than a dozen soldiers on state media declared that the country is being run by their new organisation, the Patriotic Movement for Safeguarding and Restoration.

“Today’s events mark a new era for Burkina Faso. They are an opportunity for all the people of Burkina Faso to heal their wounds, to rebuild their cohesion and to celebrate what has always made us who we are: integrity,” said Captain Sisdore Kaber Ouedraogo.

On Tuesday, Ouagadougou was packed with people cheering, singing and dancing and there were reports of celebrations in other parts of the country. The coup came after several demonstrations were held against the Kabore government which was criticised for its ineffective response to Islamic extremist violence.

“I’m happy to be here this morning to support the junta in power. We wish that terrorism be eradicated in the months or the years to come,” said Salif Kientga who was at the rally in the capital.

Some supporters waved Malian and Burkina Faso flags and held up photos of Mali’s junta ruler, Colonel Assimi Goita, beside Burkina Faso’s new leader, Lt Col Paul Henri Sandaogo Damiba, saying that military rule was the only way to pull both countries out of crisis. Others chanted “Down with ECOWAS,” the West African regional bloc that recently sanctioned Mali for delaying elections and which has also condemned the military takeover in Burkina Faso.

The junta closed the borders, imposed a curfew, suspended the constitution and dissolved the government and parliament and said it would return Burkina Faso to constitutional order, but did not specify when. The soldiers said the overthrown president is safe, but did not reveal where he is being held. A publicly circulated resignation letter signed by Kabore said that he was quitting his office in the best interest of the country.