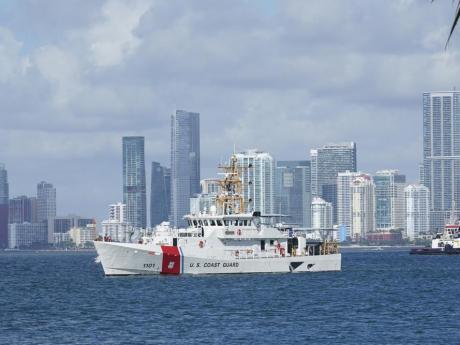 The US Coast Guard ship Bernard C. Webber leaves the coast guard base, Monday, July 19, 2021, in Miami Beach, Florida. The US Coast Guard is searching for 39 people after a good Samaritan rescued a man clinging to a boat off the coast of Florida. (AP Photo/Marta Lavandier)

MIAMI BEACH, Fla. (AP) — The US Coast Guard battled time and currents Wednesday as its planes and ships searched for 38 people missing off the coast of Florida, four days after a suspected human smuggling boat capsized in a storm.

The accident killed at least one person and left a single known survivor, and US authorities launched a criminal investigation.

Captain Jo-Ann F. Burdian said the survivor told rescuers that the boat capsized Saturday evening shortly after sailing into a storm from the Bahamas.

The Coast Guard was alerted Tuesday morning after the crew of a merchant vessel spotted the man sitting alone on the overturned hull of the 25-foot boat.

He was taken to a hospital with symptoms of dehydration and sun exposure and turned over to Homeland Security officials, who said he is “conscious and lucid.”

“With every moment that passes, it becomes much more dire and more unlikely” that survivors will be found, she told a news conference.

Crews searched around the clock, extrapolating from where the wreck was spotted about 40 miles (64 kilometres) off Fort Pierce.

By Wednesday morning, crews on at least four ships and five aircraft scanned a vast area about the size of New Jersey, Burdian said.

They planned to keep searching throughout the day and then reevaluate.

“We are using every piece of information we can to make sure we are exhausting our search efforts,” Burdian said. “But we can't search forever.”

Wednesday's forecast calls for rain and possible thunderstorms in the search area, with swells cresting at 2 to 3 feet  and winds blowing at 12 to 15 mph.

The effort includes US agents in the Bahamas.

“You're dealing with criminal organisations that have no value for human life or safety. It's really victimising the migrants. It's just about the money,” he said.

Agents have interviewed the survivor, but Salisbury would not identify the man or his nationality, nor reveal the nationalities of any others believed to have been on the vessel.

The rescued man told the Coast Guard he was part of a group of 40 people who left the island of Bimini in the Bahamas in what the Coast Guard suspects was a human smuggling operation, Burdain said.

The man said the boat capsized shortly thereafter, and no one aboard was wearing a life jacket, she added.