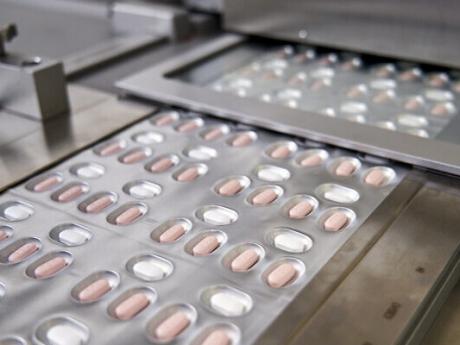 This image provided by Pfizer shows its COVID-19 pills. Drugmaker Pfizer said yesterday that it is submitting its experimental pill for US authorization, setting the stage for a likely launch in coming weeks. AP photo.

In a statement on Thursday, the EU drug regulator said giving the green light to Pfizer's Paxlovoid could help people infected with COVID-19 avoid more serious disease and being hospitalised.

EMA's expert committee recommended the pill be given to adults who don't require oxygen and who are at higher risk of severe disease.

The drug was cleared by regulators in the US and Britain in late December, although authorities noted that supplies would be extremely limited.

An antiviral pill from Merck also is expected to soon be authorised.

But Pfizer's drug is all but certain to be the preferred option because of its mild side effects and superior effectiveness as suggested by studies, including a nearly 90% reduction in hospitalisations and deaths among patients most likely to get severely ill.

The pills from both Pfizer and Merck are expected to be effective against omicron because they do not target the spike protein where most of the variant's worrisome mutations reside.

The company said it expects to have 250,000 available in the US by the end of January.

The European Medicines Agency said its decision was made based on a review of the drug's use in people who were mostly infected with the delta variant of COVID-19, but they believed it would also be helpful in curbing the current surge caused by the ultra-contagious omicron variant.

“Based on laboratory studies, Paxlovid is also expected to be active against omicron and other variants,” the regulator said. It said the drug's safety profile was “favourable” and that side effects were generally mild.