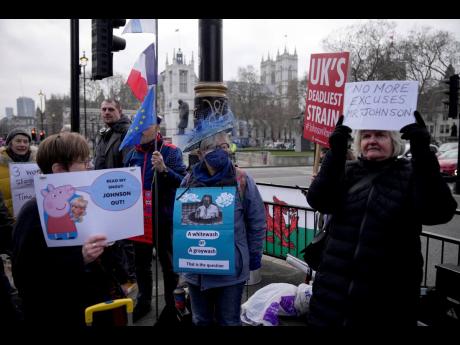 Prime Minister Boris Johnson braced on Wednesday for the conclusions of an investigation into allegations of lockdown-breaching parties, a document that could help him end weeks of scandal and discontent, or bring his time in office to an abrupt close.

Senior civil servant Sue Gray is probing allegations that the prime minister and his staff flouted restrictions they imposed on the country in 2020 and 2021, to curb the spread of the coronavirus, with ‘bring your own booze’ office parties, birthday celebrations, and ‘wine time Fridays’.

The claims have caused public anger, led some Conservative lawmakers to call for Johnson’s resignation, triggered intense infighting inside the governing party, and sparked a criminal investigation into the prime minister and his staff by London’s Metropolitan Police.

Gray is believed to have finished her inquiry, but has not said when she will submit her report to the government. Expectations among lawmakers that it would come on Wednesday gradually ebbed away as the day dragged on and Parliament adjourned for the night.

Johnson has promised to publish Gray’s report in full and to address Parliament about its findings. The earliest that could come is now today.

“When I receive it, of course I will do exactly what I said,” Johnson said during a testy Prime Minister’s Questions session in the House of Commons.

He batted away questions about the scandal and his future, saying he had “absolutely no intention” of resigning.

Wednesday’s headlines provided more bad news for Johnson, whose popularity in opinion polls has plunged amid the scandal. The Guardian’s front-page headline spoke of ‘PM’s peril’, while the left-leaning Daily Mirror said bluntly: ‘Number’s up, PM’. The right-of-centre Daily Mail differed, declaring Britain: ‘A nation that has lost all sense of proportion’.

Johnson has urged his critics to wait for Gray’s conclusions, but his wait-and-see defence weakened on Tuesday when police said they had opened a criminal investigation into some of the gatherings.

The Metropolitan Police said “a number of events” at Johnson’s Downing Street office and other government buildings met the force’s criteria for investigating the “most serious and flagrant” breaches of coronavirus rules.

The ‘partygate’ allegations have infuriated many in Britain, who were barred from meeting with friends and family for months in 2020 and 2021, so as to curb the spread of COVID-19. Tens of thousands of people were fined by police for breaking the rules.