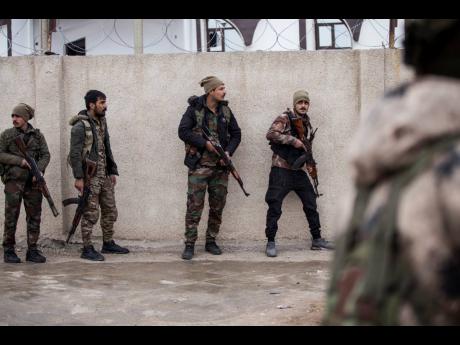 Dozens of armed Islamic State (IS) militants remained holed up in the last occupied section of a Syrian prison, US-backed Kurdish-led forces said Thursday. The two sides clashed a day after the Syrian Democratic Forces (SDF) announced they had regained full control of the facility.

Fighting between the armed extremists and SDF troops left at least two Islamic extremists dead Thursday, the SDF said in a statement. It said between 60 and 90 militants were hiding out in the northern section of the prison in the northeastern city of Hassakeh.

The SDF claimed Wednesday it had regained full control of the prison – a week after scores of militants overran the facility. The attackers allowed some to escape, took hostages, including child detainees, and clashed with SDF fighters in violence that killed dozens.

The weeklong assault on one of the largest detention facilities in Syria has turned Hassakeh into a conflict zone. The Kurdish-led administration declared a curfew and sealed off the city, barring movement in and out.

On Thursday, the administration announced a full curfew until February 1 in areas it governs in Deir el-Zour province to the south, citing security concerns. Only essential services were allowed to operate.

Thousands have been displaced because of the violence that began with a bold attack on the prison last Thursday. There were overnight celebrations in the city, including fireworks, after news that the prison had been recaptured.

It was the biggest military operation by IS since the fall of the group’s ‘caliphate’ in 2019 and came as the militants staged a number of deadly attacks in both Syria and Iraq that stoked fears they may be staging a comeback.

The SDF said about 3,000 inmates have surrendered since its operation to retake the prison’s northern wing began three days ago.

The militants had used child detainees as human shields slowing down the effort. There are over 600 child detainees in the facility that houses more than 3,000 inmates. The Kurdish officials have not provided specific numbers of the facility’s population.

Kurdish officials said a large number of children were freed Wednesday but their fate remained unclear. Rights groups and at least one child detainee from inside the prison say many children were killed and injured in the clashes. Rights groups have criticised the SDF for keeping the children in adult facilities or holding them without trials in the first place.

In a statement, SDF said the children had been kept in separate dormitories from the adults, and were detained as an “interim measure” for their safety and the safety of the community until a solution for them is found.