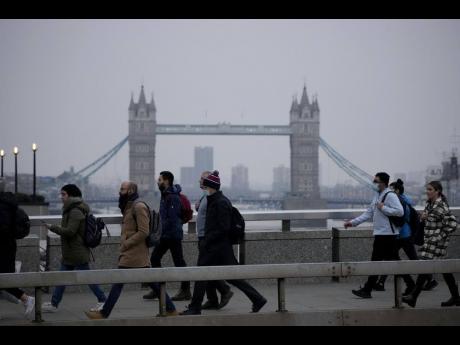 AP
Workers walk over London Bridge towards the City of London financial district, backdropped by Tower Bridge, during the morning rush hour, in London on Monday. The British government have asked people to return to working in offices starting Monday as they ease coronavirus restrictions.

From Thursday, face coverings are no longer required by law anywhere in England, and a legal requirement for COVID-19 passes for entry into nightclubs and other large venues has been scrapped.

The government last week dropped its advice for people to work from home, as well as guidance for face coverings in classrooms. From next week, restrictions on the number of visitors to nursing homes will also be lifted.

England isn’t the only place in Europe ditching coronavirus restrictions this week. On Wednesday, the Netherlands reopened restaurants, bars, museums and theatres for the first time in a month as part of broader easing of restrictions. The step came as infections in the country spiked, though admissions to intensive care units have been declining.

In Denmark, Prime Minister Mette Frederiksen said Wednesday that from February 1, Danes can enjoy free access to restaurants, museums and nightclubs, and the mandatory requirement to wear face masks on public transport and in shops will also be scrapped.

In contrast, German leaders this week decided to keep in place the country’s existing restrictions, including limits on the size of private gatherings, as the Omicron variant continues to fuel a steep rise in infections.

England’s so-called ‘Plan B’ measures were introduced in early December to stop the rapid spread of Omicron from overwhelming health services and to buy time for the population to get its booster vaccine shot.

Officials said Thursday that almost 84 per cent of people over 12 in the UK have had their second vaccine dose, and that of those eligible, 81 per cent have received their booster shot.

Hospital admissions and the number of people in intensive care units have stabilised or fallen, and daily cases have dropped from a peak of over 200,000 around New Year to under 100,000.

Health Secretary Sajid Javid said the vaccine roll-out, testing and development of antiviral treatments have combined to make “some of the strongest defences in Europe”, allowing a “cautious return” to normality.

But he added that “as we learn to live with COVID, we need to be clear-eyed that this virus is not going away”. While infections continue to fall, health officials said Omicron remained prevalent across the country, especially among children and the elderly. Coronavirus vaccines are not offered to children under 12 in the UK.

Scotland, Wales and Northern Ireland, which make their own public health rules, have similarly relaxed their virus restrictions.