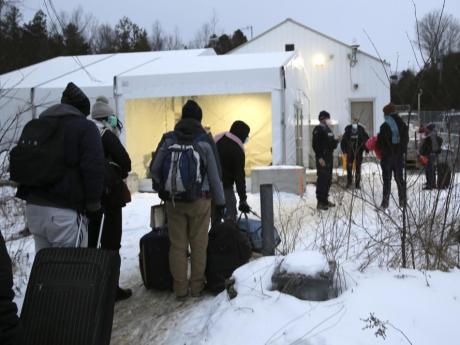 Migrants line up on the border of the United States (foreground) and Canada (background) at a reception center for irregular borders crossers, in Saint-Bernard-de-Lacolle, Quebec, Canada, Wednesday, January 12, 2022, in a photo taken from Champlain, N.Y. They are crossing the US-Canadian border into Saint-Bernard-de-Lacolle, Quebec, where they are arrested by the Royal Canadian Mounted Police and then allowed to make asylum claims. (AP Photo/Wilson Ring)

CHAMPLAIN, N.Y. (AP) — Whenever a bus arrives at the Greyhound station in Plattsburgh, New York, a small band of taxi drivers waits to drive passengers on a half-hour trip to a snowy, dead-end road that turns to dirt near the Canadian border.

There, at the border, refugees pile out of taxis or vans several times a day, and Royal Canadian Mounted Police officers warn that they will be arrested for illegal entry if they cross, which they do.

Most are soon released to pursue asylum, living and working freely while awaiting a decision.

“We have the hopes of everyone — be successful and have a change of life,” Alejandro Cortez, a 25-year-old Colombian man, said as he exited a taxi last week at the end of Roxham Road in Champlain, New York.

The town of about 6,000 is directly across the border from Saint-Bernard-de-Lacolle, Quebec.

Cortez joins a renewed stream of migrants seeking refuge in Canada after a 20-month ban on asylum requests designed to prevent the spread of COVID-19.

Families are once again lugging suitcases and carrying children across a remote, snow-covered ditch to the border.

Canada's decision to lift the ban on November 21 stands in marked contrast to the approach in the United States, where the Centers for Disease Control and Prevention has extended indefinitely a similar restriction on the border with Mexico that will enter its third year in March.

On Wednesday, a Justice Department attorney vigorously defended the ban against sharp questioning from federal appeals court judges about the scientific basis for such a far-reaching move against asylum.

The US expelled migrants nearly 1.5 million times from March 2020 through November under what is known as Title 42 authority, named for a 1944 public health law that the Trump and Biden administrations have used to deny migrants a chance to seek asylum on grounds that it will curb the spread of the coronavirus.

That accounts for about two of three arrests or expulsions at the border, most involving single adults and some families. Unaccompanied children have been exempt under President Joe Biden.

Fully vaccinated travellers have been able to enter the US and Canada since November, but Canada went a step farther by reinstating a path to asylum.

Cortez arrived in the United States on a tourist visa five months ago.

He said he couldn't go back to Colombia because of violence and the disappearance of thousands of young men.

“All of that hurts a lot,” he said. “We have to run from our country.”

Asylum-seekers on the Canadian border began appearing at Roxham Road around the time Trump became president. How it became the favoured place to cross into Canada isn't clear, but the migrants are taking advantage of a quirk in a 2002 agreement between the U.S. and Canada that says people seeking asylum must apply in the first country they arrive in.

Migrants who go to an official crossing — like the one where Interstate 87 ends just east of Roxham Road — are returned to the United States and told to apply there. But those who arrive in Canada at a location other than a port of entry, like Roxham Road, are allowed to stay and request protection.

Nearly 60,000 people sought asylum after illegally crossing the border into Canada from February 2017 through September, many at Roxham Road, about 30 miles (50 kilometres) south of Montreal, Canadian government statistics show.