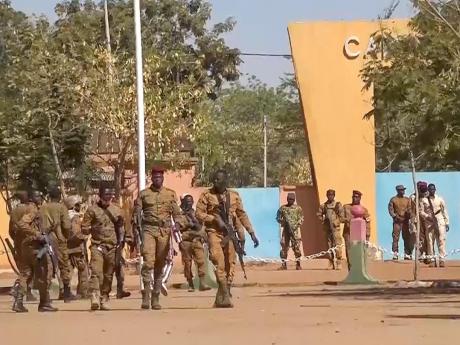 In this image made from video, Burkina Faso mutinous soldiers walk outside the Guillaume Ouedraogo military camp in Ouagadougou, Monday, January 24, 2022. Mutinous soldiers said they detained Burkina Faso's President Roch Marc Christian Kabore on Monday, a day after rebellious troops seized a military barracks, setting off a series of gunbattles in the capital of the West African country. (AP Photo)

ACCRA, Ghana (AP) — West African neighbour states on Friday suspended Burkina Faso in the aftermath of this week's coup, making it the third nation in the regional bloc to be punished for a military takeover in only 18 months, officials said.

The announcement from the bloc known as ECOWAS came days after more than a dozen mutinous soldiers went on state television in Burkina Faso to announce their military takeover of the country — that's under siege from Islamic extremist attacks.

ECOWAS had suspended neighbouring Mali after a coup there in August 2020 and then took similar action against Guinea after the president was overthrown last September.

Mali is also under punishing economic sanctions, including flight bans and asset freezes, after its coup leader failed to organise elections within 18 months as promised.

West African leaders met virtually Friday to discuss the Burkina Faso coup, and a delegation was expected to travel to Ouagadougou in the coming days.

“The rest of the world is looking up to us to be firm on this matter,” he said.

ECOWAS has faced criticism for its handling of the coups, particularly in Mali where mediators negotiated with the junta on the 18-month deadline for holding democratic elections.

Mali's coup leader has said that won't be met, citing security conditions, and has announced a vote four years from now instead.