Winter storm to bring blizzard conditions to US East Coast 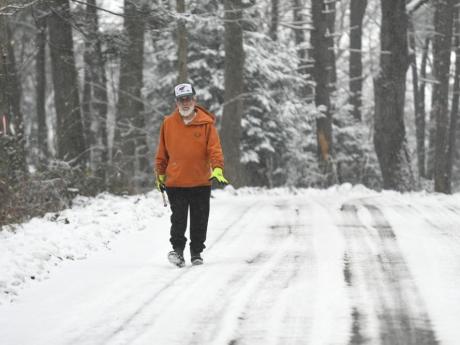 BOSTON (AP) — Residents and officials across the Northeast and mid-Atlantic regions of the United States were bracing for a powerful winter storm expected to produce blizzard conditions Friday and Saturday.

Heavy snow and strong winds were forecasted to begin in parts of the Carolinas and Appalachia on Friday evening, according to the National Weather Service.

The system will then intensify as a nor'easter and bring snowy conditions up the East Coast to New England, where forecasters warned of localised snowfall totals of up to 20 inches and wind gusts of 50 to 60 miles per hour.

In Virginia, where a blizzard earlier this month stranded hundreds of motorists along a major interstate highway for hours, Governor Glenn Youngkin declared a state of emergency and said officials have already begun to position its resources in anticipation of downed trees, electrical outages and major impacts to travel.

The state's Eastern Shore faced possible blizzard conditions that could bring winds as high as 50 miles per hour, up to a foot of heavy and wet snow and possibly tidal flooding.

“The key message for all Virginians is to stay aware of the weather conditions and to stay off the roads if possible,” the governor said.

Similar snowfall projections were expected up the coast to the Philadelphia and New York City areas, with seaside communities from the Jersey Shore to suburban Long Island and southeastern Connecticut potentially seeing heavier snowfall rates and stronger winds.

Airlines braced for the highest single-day total of cancellations in three weeks.

By midday Friday, airlines had cancelled more than 1,000 flights in the US, and they had already scrubbed about 2,500 scheduled for Saturday, according to tracking service FlightAware.

The hardest-hit airports included those in Chicago, the New York City area and Boston.