Pandemic gets tougher to track as COVID testing plunges 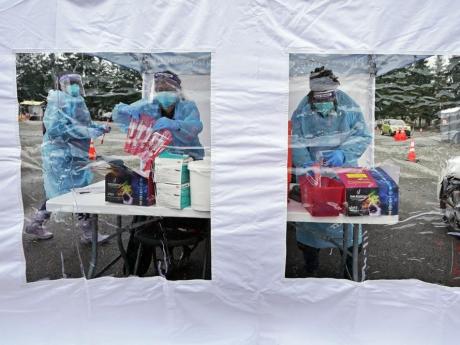 Workers at a drive-up COVID-19 testing clinic stand in a tent as they prepare PCR coronavirus tests on January 4, 2022, in Puyallup, Washington. Testing for COVID-19 has plummeted across the globe, dropping by 70 to 90% worldwide from the first to the second quarter of 2022, making it much tougher for scientists to track the course of the pandemic and spot new, worrisome viral mutants as they emerge and spread. (AP Photo/Ted S. Warren, File)

Testing for COVID-19 has plummeted across the globe, making it much tougher for scientists to track the course of the pandemic and spot new, worrisome viral mutants as they emerge and spread.

Experts say testing has dropped by 70 to 90% worldwide from the first to the second quarter of this year — the opposite of what they say should be happening with new omicron variants on the rise in places such as the United States and South Africa.

“We're not testing anywhere near where we might need to,” said Dr Krishna Udayakumar, who directs the Duke Global Health Innovation Center at Duke University.

“We need the ability to ramp up testing as we're seeing the emergence of new waves or surges to track what's happening” and respond.

Reported daily cases in the US, for example, are averaging 73,633, up more than 40% over the past two weeks, according to data compiled by Johns Hopkins University.

But that is a vast undercount because of the testing downturn and the fact tests are being taken at home and not reported to health departments.

An influential modelling group at the University of Washington in Seattle estimates that only 13% of cases are being reported to health authorities in the US — which would mean more than a half million new infections every day.

The drop in testing is global but the overall rates are especially inadequate in the developing world, Udayakumar said. The number of tests per 1,000 people in high-income countries is around 96 times higher than it is in low-income countries, according to the Geneva-based public health nonprofit FIND.

What's driving the drop? Experts point to COVID fatigue, a lull in cases after the first omicron wave and a sense among some residents of low-income countries that there's no reason to test because they lack access to antiviral medications.

At a recent press briefing by the World Health Organization, FIND CEO Dr Bill Rodriguez called testing “the first casualty of a global decision to let down our guard” and said “we're becoming blind to what is happening with the virus.”