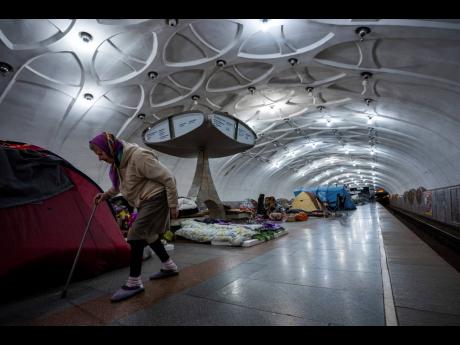 AP
An elderly woman walks inside a metro station being used as a bomb shelter in Kharkiv, Ukraine, yesterday.

Finland’s leaders on Thursday came out in favour of applying to join NATO, and Sweden could do the same within days, in a historic realignment on the continent 2 1/2 months after Russian President Vladimir Putin’s invasion of Ukraine sent a shiver of fear through Moscow’s neighbours.

The Kremlin reacted by warning that it will be forced to take retaliatory “military-technical” steps.

On the ground, meanwhile, Russian forces pounded areas in central, northern and eastern Ukraine, including the last pocket of resistance in Mariupol, as part its offensive to take the industrial Donbas region, while Ukraine recaptured some towns and villages in the northeast.

The first war-crimes trial of a Russian soldier since the start of the conflict is set to open on Friday in Kyiv. A 21-year-old captured member of a tank unit is accused of shooting to death a civilian on a bicycle during the opening week of the war.

Finland’s president and prime minister announced that the Nordic country should apply right away for membership in NATO, the military defense pact founded in part to counter the Soviet Union.

“You (Russia) caused this. Look in the mirror,” Finnish President Sauli Niinisto said this week.