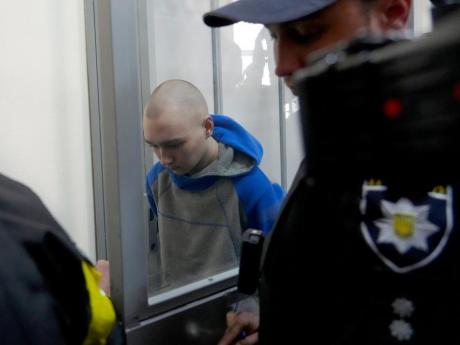 Russian army Sergeant Vadim Shishimarin, 21, arrives for a court hearing in Kyiv, Ukraine, Friday, May 13, 2022. The trial of a Russian soldier accused of killing a Ukrainian civilian opened Friday, the first war crimes trial since Moscow's invasion of its neighbor. (AP Photo/Efrem Lukatsky)

KYIV, Ukraine (AP) — A 21-year-old Russian soldier went on trial Friday in Kyiv for the killing of an unarmed Ukrainian civilian, marking the first war crime prosecution of a member of the Russian military after 11 weeks of bloodshed in Ukraine.

The soldier, a captured member of a tank unit is accused of shooting a 62-year-old Ukrainian man in the head through an open car window in the northeastern village of Chupakhivka during the first days of the war.

Scores of journalists and cameras packed inside a small courtroom at the Solomyanskyy district court in Ukraine's capital, where the suspect, Sergeant Vadim Shyshimarin, sat in a glassed-off area wearing a blue and grey hoodie, sweatpants and a shaved head.

He faces up to life in prison under a section of the Ukrainian criminal code that addresses the laws and customs of war.

Friday's hearing in Shyshimarin's case was brief. A judge asked him to provide his name, address, marital status and other identifying details. He also was asked whether he understood his rights, quietly replying “yes,” and if wanted a jury trial, which he declined.

The judges and lawyers discussed procedural matters before the judges left the courtroom and then returned to say the case would continue on May 18.