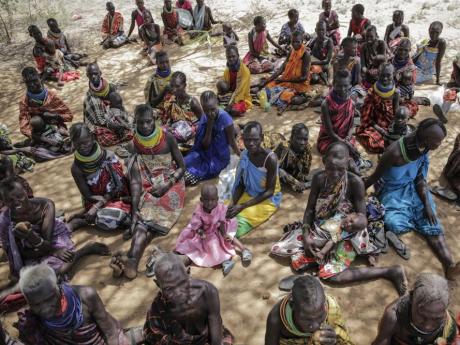 Villagers gather during a visit by United Nations Under-Secretary-General for Humanitarian Affairs Martin Griffiths, in the village of Lomoputh in northern Kenya Thursday, May 12, 2022. Griffiths visited the area on Thursday to see the effects of the drought which the UN says is a severe climate-induced humanitarian emergency in the Horn of Africa. (AP Photo/Brian Inganga)

Martin Griffiths, the UN under-secretary-general for humanitarian affairs, said he saw families in Kenya's Turkana region that have nothing left after their animals starved to death. Turkana is an epicentre of the drought affecting parts of the East African country.

“The world's attention is elsewhere, and we know that,” Griffiths said during a visit to the region Thursday.

Griffiths and other humanitarian representatives visited a pastoralist community in Turkana's Lomuputh area as part of efforts to draw attention to the humanitarian challenge stemming from the drought.

“Lomoputh deserves our attention,” Griffiths said, noting that children scavenging for fruit to eat need help “to have the slightest possibility to survive to the next day.”

Some residents of Lomoputh spoke to The Associated Press of their desperate need for food aid.

“I have not received any help, and this child has not eaten anything since yesterday,” Jecinta Maluk, a mother of five children, said. “This is the main problem.”

The extreme drought in Kenya, where 3.5 million people are affected by severe food insecurity and acute malnutrition, has exacerbated the factors causing people to go hungry.

The UN warned earlier this year that an estimated 13 million people are facing severe hunger in the wider Horn of Africa region as a result of persistent drought conditions. Malnutrition rates are high in the region, and drought conditions are affecting pastoral and farming communities.