Parts of Spain on alert amid ‘extreme’ May temperatures 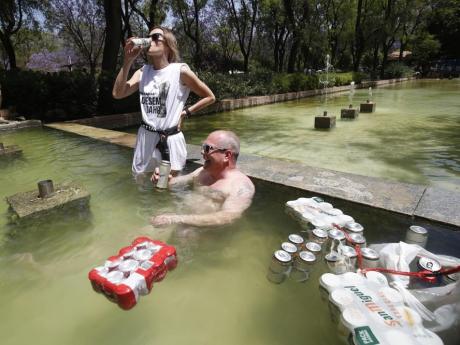 Eintracht soccer supporters drink beer as they cool down in a water fountain in downtown Seville, Spain, Wednesday, May 18, 2022. Large swathes of Spain were under alert on Friday, May 20, 2022, as a wave of intense heat began sweeping across the country. (AP Photo/Angel Fernandez, File)

MADRID (AP) — Large parts of Spain were under alert Friday as a wave of intense heat began sweeping across the country, leaving residents sweltering through May temperatures that rank among the hottest in two decades.

A mass of hot, dry air carrying dust from North Africa has pushed temperatures up to 15 degrees above average, with the mercury topping 40 C (104 F) in parts of the country.

The State Meteorological Agency said it expected the “unusual and extreme” temperatures to peak on Saturday.

“These will probably be among the warmest temperatures we've seen in May in the 21st century,” agency spokesman Rubén del Campo said.

By Friday, a handful of records had already been set. In the southern Spanish city of Jaén, the temperature climbed to 38.7 C (101.7 F) — 15 degrees above the seasonal average — in a record for the month of May.

In the central city of Cuenca, the daily low temperature of 19.5 C (67.1 F) was two degrees higher than the previous May minimum.

While the temperatures are expected to fall short of what meteorologists in Spain define as a heat wave, what makes this episode singular will be its persistence, with nighttime temperatures expected to hover above 20 C (68 F) in many places.

The high temperatures are forecast to push northeast in the coming days, with little relief expected until after Sunday.