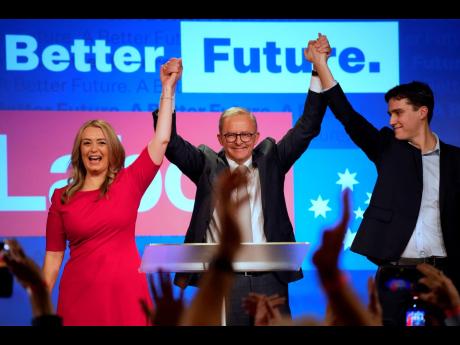 Australians awoke on Sunday to a new prime minister in Anthony Albanese, the centre-left Labour Party leader whose ascension to the nation’s top job from being raised in social housing by a single mother on a disability pension was said to reflect the country’s changed fabric.

The 59-year-old career politician, who has described himself as the only candidate with a “non-Anglo Celtic name” to run for prime minister in the 121 years the office has existed, referred to his humble upbringing in the inner-Sydney suburb of Camperdown, while thanking electors for making him the country’s 31st leader.

“Every parent wants more for the next generation than they had. My mother dreamt of a better life for me. And I hope that my journey in life inspires Australians to reach for the stars,” Albanese told jubilant supporters, after tipping Scott Morrison out of office to end nine years of conservative rule.

It’s unclear whether Albanese’s party could form a majority government or will have to rely on an increased number of independents and minor party lawmakers who won seats in Saturday’s election, in results analysts described as extremely complicated, and which also mirrored the face of modern Australia.

With counting set to continue for many days as postal votes are tallied, one prospect that emerged was that Albanese may need to be sworn in as acting prime minister to attend Tuesday’s Quad summit in Tokyo with US President Joe Biden, Japanese Prime Minister Fumio Kishida, and Indian Prime Minister Narendra Modi.

Biden congratulated Albanese on his election victory in a phone call on Sunday, the White House said, and reaffirmed Washington’s “steadfast commitment to the US-Australia alliance and his intent to work closely with the new government to make it stronger still”.

The election delivered a clear rebuke to Australia’s traditional two-party system, both to Labour and the heavily defeated conservative coalition led by Morrison, the Liberal party’s outgoing prime minister. The major parties bled votes to fringe parties and independents, including in many seats considered Labour or coalition strongholds.