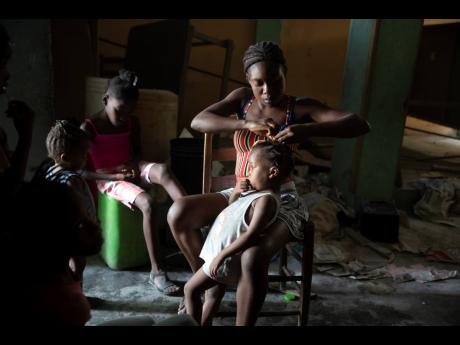 AP
A woman braids a girl’s hair at a school converted into a shelter after they were forced to leave their homes because of clashes between armed gangs in the Tabarre neighbourhood of Port-au-Prince, Haiti, on May 12. UNICEF’s representative in Haiti said that gang violence has worsened access to basic things like water, food and medicine.

It was about 6 a.m. when Venique Moïse flung open the door of her house and saw dozens of people running – their children in one hand and scant belongings in the other – as gunfire intensified.

Minutes later, she joined the crowd with her own three kids and fled as fires burned nearby, collapsing homes. Over the coming hours and days, the bodies of nearly 200 men, women, and children – shot, burned or mutilated with machetes by warring gangs – were found in that part of Haiti’s capital.

“That Sunday, when the war started, I felt that I was going to die,” Moïse said.

Gangs are fighting each other and seizing territory in the capital of Port-au-Prince with a new intensity and brutality. The violence has horrified many, who feel the country is swiftly unravelling as it tries to recover from the July 7 assassination of President Jovenel Moïse and the United Nations prepares to debate the future of its long-time presence in Haiti.

Experts say the scale and duration of gang clashes, the power criminals wield, and the amount of territory they control have reached levels not seen before.

Gangs have forced schools, businesses, and hospitals to close as they raid new neighbourhoods, seize control of the main roads connecting the capital to the rest of the country, and kidnap victims daily, including eight Turkish citizens still held captive, authorities say.

Gangs also are recruiting more children than before, arming them with heavy weapons and forming temporary alliances with other gangs in attempts to take over more territory for economic and political gain ahead of the country’s general elections, said Jaime Vigil Recinos, the United Nations’ police commissioner in Haiti.

“It’s astonishing,” he told The Associated Press, noting that gang clashes are becoming protracted, ruthless affairs. “We are talking about something that Haiti hasn’t experienced before.”

At least 92 civilians and 96 suspected gang members were killed between April 24 and May 16, with another 113 injured, 12 missing and 49 kidnapped for ransom, according to the UN Office of the High Commissioner for Human Rights. The office warned that the actual number of people killed “may be much higher”.

Criminals also gang-raped children as young as 10 and set fire to at least a dozen homes, forcing some 9,000 people to flee and seek temporary shelter in churches, public parks, and shuttered schools, UN officials said.

Haiti’s National Human Rights Defence Network said some victims were decapitated, while others were thrown into wells and latrines. Gangs posted pictures of the gruesome scenes on social media to further terrorize people. The network said that most women and girls were raped before being killed.

“Armed violence has reached unimaginable and intolerable levels in Haiti,” Michelle Bachelet, the UN high commissioner for human rights, said in a May 17 statement.

Bruno Maes, UNICEF’s representative in Haiti, told The AP that one growing concern is the lack of access to basic things, like water, food and medicine, because people remain trapped in certain areas while gangs continue to fight, noting that malnutrition is on the rise, affecting 1 in 5 children in the Cité Soleil neighborhood alone.

“We are really seeing a strangulation of Port-au-Prince,” he said, adding that UNICEF has been forced to use a helicopter, and now a boat, to try to reach those most in need.