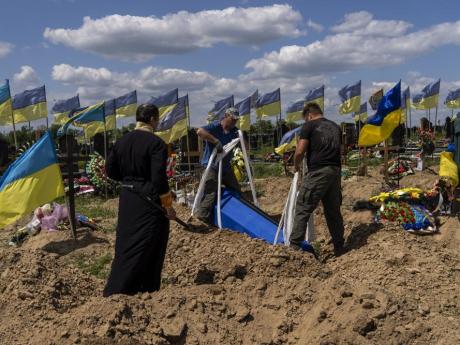 KYIV, Ukraine (AP) — Workers digging through the rubble of an apartment building in Mariupol found 200 bodies in the basement, Ukrainian authorities said Tuesday, a grim reminder of the horrors still coming to light in the ruined city that has seen some of the worst suffering of the three-month-old war.

The bodies were decomposing and a stench permeated the neighbourhood, said Petro Andryushchenko, an adviser to the mayor.

It's not clear when they were discovered.

Perched on the Sea of Azov, Mariupol was relentlessly pounded during a monthslong siege that finally ended last week after some 2,500 Ukrainian fighters abandoned a steel plant where they had made their last stand.

Russian forces already held the rest of the city, where an estimated 100,000 people remain out of a prewar population of 450,000, many trapped without food, water, heat or electricity.

Ukrainian authorities have said at least 21,000 people have been killed — and accused Russia of trying to cover up the extent of the horrors by bringing in mobile cremation equipment. They have also alleged some of the dead were buried in mass graves.

Strikes have also hit a maternity hospital and a theatre where civilians were sheltering.

Ukrainian President Volodymyr Zelensky accused the Russians of waging “total war,” seeking to inflict as much death and destruction as possible on his country.

“Indeed, there has not been such a war on the European continent for 77 years,” Zelensky told Ukrainians Monday night, on the eve of the three-month anniversary of the start of the war.