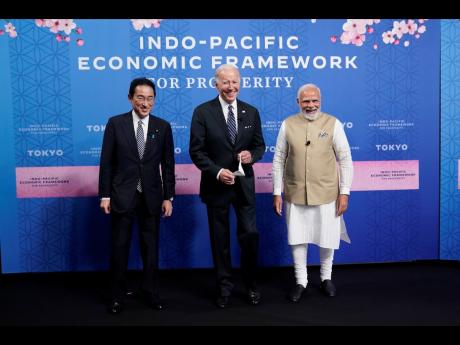 President Joe Biden launched a new trade deal with 12 Indo-Pacific nations on Monday aimed at strengthening their economies as he warned Americans worried about high inflation that it is “going to be a haul” before they feel relief. The president said he does not believe an economic recession is inevitable in the US.

Biden, speaking at a news conference after holding talks with Japan’s Prime Minister Fumio Kishida, acknowledged the US economy has “problems” but said they were “less consequential than the rest of the world has”.

His comments came just before Biden’s launch of the Indo-Pacific Economic Framework. His administration says the trade deal is designed to signal US dedication to the contested economic sphere and to address the need for stability in commerce after disruptions caused by the pandemic and Russia’s invasion of Ukraine.

Nations joining the US in the pact are: Australia, Brunei, India, Indonesia, Japan, South Korea, Malaysia, New Zealand, the Philippines, Singapore, Thailand and Vietnam. Along with the United States, they represent 40 per cent of world GDP.

The countries said in a joint statement that the pact will help them collectively “prepare our economies for the future” after the fallout from the pandemic and the war in Ukraine.

Biden and Kishida were joined for the launch event by Indian Prime Minister Narendra Modi, while representatives from the other countries appeared by video. Modi was in Tokyo for Tuesday’s meeting of the Quad, a four-country security group that also includes the US, Japan and Australia.

The White House said the framework will help the United States and Asian economies work more closely on issues including supply chains, digital trade, clean energy, worker protections and anti-corruption efforts. The details still need to be negotiated among the member countries, making it difficult for the administration to say how this agreement would fulfil the promise of helping US workers and businesses while also meeting global needs.

Critics say the framework has gaping shortcomings. It doesn’t offer incentives to prospective partners by lowering tariffs or provide signatories with greater access to US markets. Those limitations may not make the US framework an attractive alternative to the Trans-Pacific Partnership, which moved forward without the US after former President Donald Trump pulled out. China, the largest trading partner for many in the region, is also seeking to join TPP.

“I think a lot of partners are going to look at that list and say: ‘That’s a good list of issues. I’m happy to be involved,’” said Matthew Goodman, a former director for international economics on the National Security Council during President Barack Obama’s administration. But he said they also may ask, “Are we going to get any tangible benefits out of participating in this framework?”