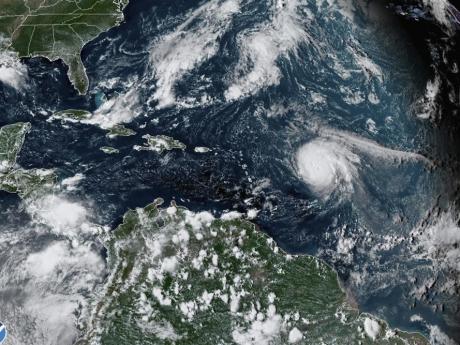 This satellite image provided by the National Oceanic and Atmospheric Administration shows Hurricane Sam (center right) in the Atlantic Ocean, Monday, September 27, 2021. On Tuesday, May 24, 2022, federal meteorologists say the Atlantic should expect another extra busy hurricane season in 2022. (NOAA via AP, File)

The National Oceanic and Atmospheric Administration predicted Tuesday that the summer in the Atlantic will produce 14 to 21 named storms, six to 10 becoming hurricanes and three to six turbo-charging into major hurricanes with winds greater than 110 miles per hour.

Even with normals shifting upwards to reflect more active storm seasons in recent decades, these predictions are above the 30-year average of 14 named storms, seven hurricanes and three major hurricanes.

The National Hurricane Center ran out of names for Atlantic storms in the last two years, with a record-setting 30 named storms in 2020 and 21 last year.

In the past five years, there have been more Category 4 and 5 hurricane landfalls in the United States than in the previous 50 years combined.

This hurricane season “is going to be similar to last year and given that you need only one bad storm to dramatically affect your life, if you fail to plan around this outlook, you're planning to fail,” NOAA Administrator Rick Spinrad told The Associated Press Tuesday.

“You can take this outlook to the bank literally when it looks to protecting your property.”

Every weather factor pointed to a busier season, said Matthew Rosencrans, lead hurricane season outlook forecaster for NOAA's Climate Prediction Center. He pointed to a multi-decade long trend to more storms in the Atlantic, an active monsoon season in West Africa, a La Nina — the natural and occasional cooling of parts of the equatorial Pacific that changes weather worldwide — and warmer than normal ocean temperatures, which scientists say are stoked by climate change.