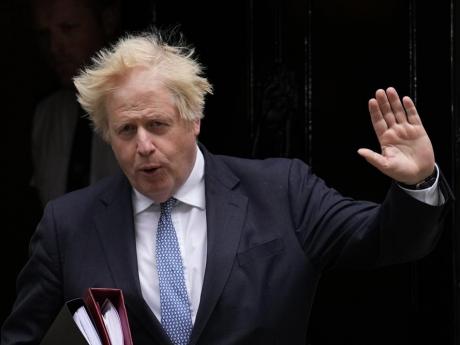 Johnson said he took “full responsibility” for the breach and he insisted he would not resign.

Revelations that Johnson and his staff repeatedly flouted restrictions they imposed on the country in 2020 and 2021 have fuelled outrage in Britain and led to calls from opponents for Johnson to step down over the scandal known as “partygate.”

Most lawmakers in Johnson's governing Conservative Party have so far stood by him, and it's not yet clear if senior civil servant Sue Gray's much-anticipated report will change that.

Gray investigated 16 gatherings attended by Johnson and his staff while UK residents were barred from socialising, or even from visiting sick and dying relatives, because of coronavirus restrictions.

Gray's report concluded that the “senior leadership team ... must bear responsibility” for a culture that allowed events to take place that “should not have been allowed to happen.”

She said there had been “failures of leadership and judgment in No. 10,” a reference to the prime minister's 10 Downing St. office.

“Those in the most junior positions attended gatherings at which their seniors were present, or indeed organised,” she said.

A separate police investigation resulted in fines for 83 people —including Johnson — making him the first British prime minister ever found to have broken the law while in office.

Speaking to lawmakers after the report was published, Johnson said he took “full responsibility for everything that took place,” adding that he was sorry but insisted that he did not knowingly break any rules. He said he was “humbled” and had “learned a lesson” but that it was now time to “move on” and focus on bolstering the economy.

Critics, some of them inside the Conservative Party, have said Johnson lied to Parliament about the events. Ministers who knowingly mislead Parliament are expected to resign.